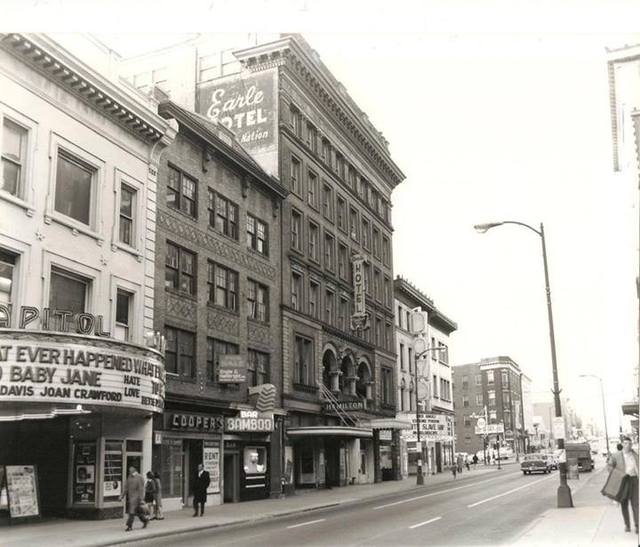 The Hamilton Theatre was opened on September 11, 1916 with Billie Burke in “Gloria’s Romance” & Mary Pickford in “Hulda from Holland”. This was one of four theatres that were to line the 100 block of N. Queen Street. Seating was listed at 1,014. This was one of three houses in the block that was operated by Warner Bros. and its subsidiaries.

The Hamilton Theatre closed in the early-1960’s and was later demolished.

I was a frequent visitor to Lancaster as a child and an avid movie goer. I remember the Hamilton as a B movie house that ran a lot of horror films. It had a wonderful lobby. The lobby was narrow and long with doors leading to the auditorium at the rear. There were several grand marble pillars and a lot of mirrors in the lobby. A large concession stand was along the right wall. I do not recall the
auditorium. I visited Lancaster recently and was very sad to see this block of Queen Street without the wonderful theaters. I remember downtown Lancaster as a vibrant place full of wonderful shops and people. It was sad to see the downtown virtually deserted on a week day afternoon. The old Watt & Shand department store is now a Marriot Hotel.

LiKe so many of us I bet you wished you would have snapped a few pictures.Good Comment,garyh.

If we had known it would it would not last forever we all would have taken photos. And we might have fought harder to save some of these gems.

There still might be one in the local newspaper achieves.

The Hamilton Theatre was opened in 1917 by Mr. and Mrs. George Krupa, who had opened the Hippodrome Theatre the previous year.

The Hamilton Theatre was already closed by the time I was old enough to go to movies. I remember going through that block of North Queen Street riding one of the old Conestoga Transporation Co. buses on my way to high school from 1961 to 1964. During some of that time the lobby was used for a bar. However, as was mentioned earlier on this thread, the long outdoor entrance seemed like a dark and dreary place. I know the theatre only had one floor and from the black and white pictures I have saved from the newspaper articles when they demolished the entire block, the auditorium was nicer than what you would have imagined, based on the street side appearance. I
know there was not a marquee from the time I remember. There was an
overhang over the front sidewalk entrance and a small sign hanging above the overhang with the name Hamilton in neon with white lights around the sign. However, it was a rectangular shaped sign rather than one that was lengthwise on the front of the building. My parents and grandparents would tell me that the Hamilton was the place for youngsters to go to on Saturday afternoon for the weekly western serials and those type of attractions. When you look at what has happened to the 2nd block of North Queen street, it was far worse after the urban renewal project that what it was. I just remember the local government officials were in such a hurry to demolish what was a thriving entertainment and shopping street and then when everything was gone, it sat as one giant mud hole because they had no plans as to what they were going to do after the demolishing was done. Oh to have at least one of those theatres back in operation. Sorry I cannot be of more help. If I find the pictures I have saved from the newspaper articles when the block was being demolished I might be able to add more then.

I enjoyed learning more about the Hamilton Theatre, especially from Dennis Zimmerman’s post. I sought information about it because my grandmother’s brief autobiographical sketch notes that when she and my grandfather were courting, they used to go to the Hamilton on Saturdays to watch the western serials. Does anyone have more photos of the Hamilton, from the outside and inside?