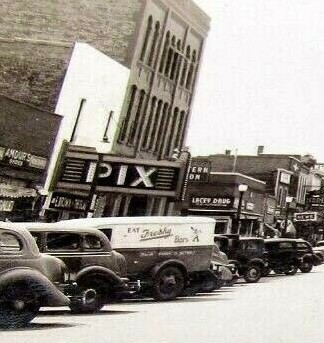 The theatre closed in April 1957. It was converted into a bar which was later destroyed by fire and was demolished. The site is now the home of the Dacotah Museum and the Library.

According to a table compiled by downtown Aberdeen historian Don Artz (page 51 of this PDF), the house that was called the Garrick Theatre in early 1926 and became the State Theatre later that year was at 19 S. Main Street, and had earlier been known as the Bijou, then the Strand. After State, the house had three additional names: the Ritz, the Pix, and finally the World.

The house was listed as the Bijou Theatre in a 1916 city directory. According to this web page, this was the third location of the Bijou, the house having operated at two other locations beginning in 1906. In 1909 it moved into the building at 19 S. Main Street, just two doors down from the location at which it had first reopened (15 S. Main) in 1907.