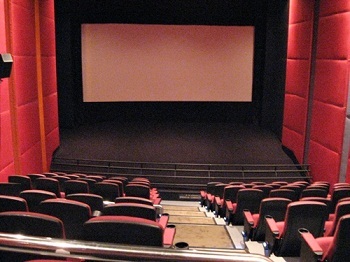 The Yuen Long Theatre is a neighbourhood cinema in Yuen Long in the New Territories of Hong Kong.

The theatre opened to business in 17th January, 1961 as a 1,500-seat cinema with stalls and balcony in an independent theatre building. The air-conditioned auditorium is on the ground floor of the theatre building, with the lobby on the ground floor, and a foyer for the patrons of the dress circle on the second floor. The front portion of the third floor of the building was designated for a proposed bistro in its initial architectural design. It was equipped with two Western Electric projectors as well aa a Western Electric curved CinemaScope screen.

The theatre is the oldest theatre in Hong Kong still in business as of February 2010 after the closure of the Fan Ling Theatre in Fan Ling in January 2010.

As a neighbourhood cinema in the New Territories in the 1960’s, the Yuen Long Theatre did not post advertisements in the Chinese language newspapers but by programme posters instead.

The theatre building was sold by auction on 11th February, 1985 for $14,000,000 Hong Kong Dollars, and the buyer was Mr. Chu Lap Hoi, who was one of the two general managers of the theatre.

The theatre closed on 1st June, 1990 for renovation, and re-opened in late-1990 as a theatre with two auditoriums, with the stalls and balcony section of the theatre converted into auditoriums respectively.

In early-2000’s, the auditorium in the former stalls section was closed, with the auditorium in the former balcony section remained. Certain part of the ground floor of the theatre building was converted into a computer-game parlour. The Yuen Long Post Office of the Hong Kong Post opened on the ground floor of the building on 30th December, 2002.
The spacious lobby of the theatre was reduced in size, with a ticket booth and a staircase leading to the foyer of the former dress circle which now served as a waiting area of the theatre.

The theatre closed on 1st September, 2006 for renovation. It re-opened on 5th April, 2007 as a brand new theatre with three auditoriums. The auditorium converted from the former balcony section was bisected into two auditoriums with 130 and 138 seats respectively. A third auditorium with 52 seats was converted from the proposed bistro section in its original architectural plan on the front part of the third floor.