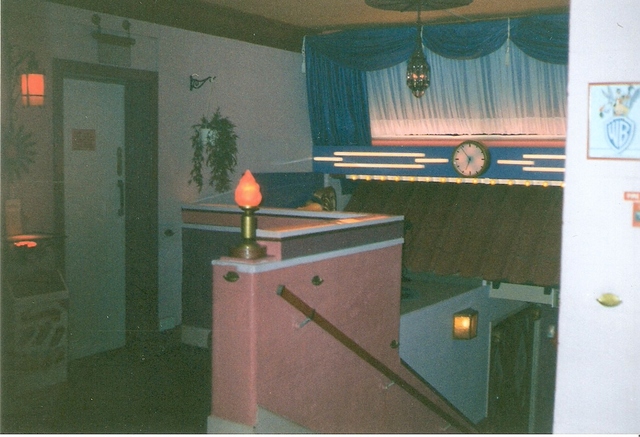 Located in Malton in the North Riding of Yorkshire. The Palace Theatre opened on 7th May 1934 with Bing Crosby in “College Humour”. It incorporates part of the earlier (19th Century) Corn Exchange building which was adapted into the Exchange Hall Picture Hall on 13th February 1915. The architect was James Brodie, from Pudsey, Leeds with interior decoration by Messrs Dodsworth Ltd. and marble and terrazzo flooring by John Cooke & Son (Huddersfield) Ltd. The main contractor for the cinema was W Birch & Son Ltd. of York.

It was a very unusual design as the entrance foyer (through the 19th century facade) backed onto the rear stage wall (there was a full fly tower for this cine-variety house). To the left there was entry to the auditorium which had a wide aisle at both stalls and circle level on one side only. The scene dock doors were at the rear of the auditorium - hence the need for the wide aisle at stalls level - as Yorkersgate at the front is a busy road unsuitable for unloading. Why the stage was not sited more conventionally at the rear is a mystery. The Corn Exchange façade was fitted with some still surviving Art Deco style stained glass windows.

In 1987 the Palace closed for conversion to a smaller cinema in the circle, now accessed from the rear exit - but which still contains Art Deco plasterwork - whilst the stage and stalls were converted into a shopping mall using the main Yorkersgate entrance. The original circle entrance is retained as an emergency exit along the long aisle connecting the circle to the stage wall.

Closed in 1998, the Palace (and Mall) lay empty until 2002 when on July 11th, the cinema reopened with a charity screening of "Casablanca" with "Star Wars - Attack of the Clones" from the following day.

The cinema has been totally refurbished and redecorated and functions as a full time cinema. There is the possibility that conference and bingo use could be introduced during the day - without interrupting the film programming.

This is an exceptionally good place to see a movie. Three rows (out of a total of seven) of pullman seats have some of the best legroom in the UK, the sound (Dolby) excellent, the decor superb and there is a real sense of occasion as the house tabs open followed by the rising festoon behind to reveal the large screen.

In 2006, the screen in the former circle was divided and there were two screens operating. A third screen with 12-seats was added in 2022.

The Palace Cinema is a Grade II Listed building.

A second screen has now been added to the Palace cinema (opened 2006) and it was one of the first in the area to utilise digital projection.

A recent photo of the exterior can be found here :
View link

Screen curtains [tabs] seem to have disappeared in Screen 1 now that it has digital as well as 35mm projection. Jeremy Powell who has run the cinema for the past few years has worked really hard to make the cinema profitable. Now the “twinning” means that the former auditorium [circle area of the original Palace] is halved.

The Palace Cinema has been put up for sale – it is continuing to operate in the meantime.

The Palace was actually put up for sale in October 06 and was taken of the market in Janaury 07 after the owner Jeremy powell’s circumstances changed and he decided to carry on running the cinema. It’s future under Jeremy is now saved. WEll done Jeremy.

As stated above the former circle has now been split into two unequal portions (90 seats and 40 seats approx), but a great deal of care has gone into disguising the partition wall to look like the original decor. Regrettably neither cinema has screen tabs now.

Myself and a colleague were looking for a cinema to lease in 1986, we approached ‘Star’ in Leeds to see if they had anything, they offered a twin screen we said yes, all was looking good, then they cancelled, they had sold out to Cannon. They offered another 3 screen in a mining town, (the strike had just ended) we said no, then we were offered a single in Pontefract but the terms of the lease were unacceptable. Watching the local tv news one day we saw some footage of the Palace which was being turned into a shopping mall with a cinema. The next day I phoned up the local council, they gave me the name of the company that was doing it, we arranged to meet, had a look and said yes. It was in such a state, all the seats from the stalls had been dumped there plus other rubbish and with the broken windows pigeons too. We got it rent free until we opened. The seats and tabs came from the then close Tower cinema in Leeds, other fittings came from the ABC in York being demolished at the time. There were five rows of tip ups and two of pullmans, 142 seats. The projector, FP25 came from Nottingham and the tower from Liverpool. Business was very good until the Warner multiplex opened in York.
The first film was ‘Crocodile Dundee’. The rainbow coloured slats which can be seen above the screen in some photos were off one of the sets of ‘321’ the YTV quiz show.