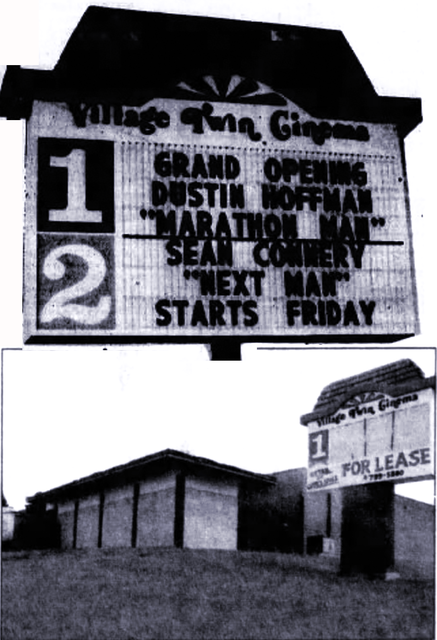 The Village Twin was opened November 12, 1976 with Dustin Hoffman in “Marathon Man” and “Next Man”. Seating was listed at 480. The theatre opened under the ownership of Carisch Theatre, later operated by Fox Intermountain Theatres and finally by Carmike Theatres.

Carmike closed the Village Twin on February 8, 2001 and it became a clinic.

There appears to be a bit of confusion here. The Fox theater within the Holiday Village Mall had an entrance on the 13th Ave side (rear of the mall)as well as inside of the mall. This theater was disassembled/demolished. I don’t know the date but it was after 1976. The Fox logo is still in the masonry above the mall real entrance. Across the Avenue is the Village Twin which was still operating at least until around 1995 (approx). It went from a first run house to second run with economy tickets. All seats $2 if I remember right. It seemed to be a relatively new theater but it was closed to direct business to the Cine 4 which was also closed later to direct patrons to the Carmike 10 at Marketplace. Both the Village Twin and the Cine 4 buildings became re-purposed to other commercial usages.

The Village Twin opened November 12, 1976 with “Marathon Man” and “Next Man”.Mel C. Glatz was the architect. It closed February 8, 2001 likely at the end of a 25-year lease as a dollar house. The space became a clinic.