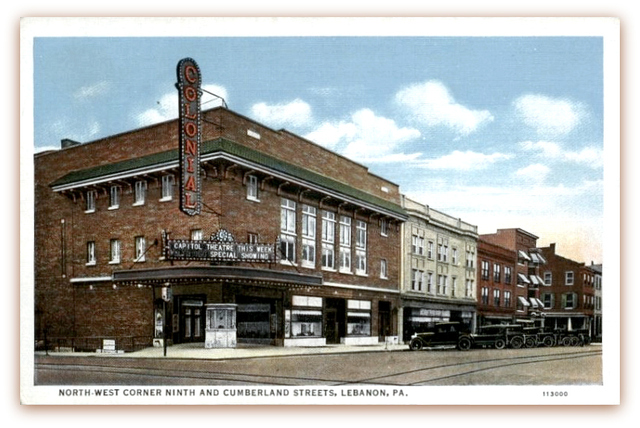 The Colonial Theatre closed in 1975 and has since been demolished, there is a parking lot where the theatre once stood.

JimmiB…Wasn’t there a fire in that block that took the Academy and several other buildings?

The roof could have been repaired, but the damage caused by that hole was extensive. Much of the ornate plaster on the ceilings and the walls had migrated onto the carpet. And fixtures like the seats, projectors, concession stand were all ruined. A sad irony: old painted flats were removed from the Academy before the auditorium was demolished and taken to the Colonial for preservation. Unless somehow they were saved, they might have been lost with that building.

John, I live in Lebanon. John Heisey was owner of Lebanon Bus Co. and Lebanon Coach Co. He also was owner of the former Messick’s Food Market. I thought you might have been part of that branch of the Messick family. There were two major fires in that block. One was the Greektown Pizza fire which had one fatality and destroyed about a half block of buildings. I think this is the fire that destroyed the rear of the Academy. The other was the Lebanon campus of HACC, the conversion of a closed department store. Caused by welding sparks, this destroyed several buildings and led to the death of a Lebanon fire fighter. I’ll see if I can find more on the Academy fire. Hillary, I didn’t know about the flats being moved to the Colonial but if they were worth anything they were probably sold by the “investor” that bought the building at tax sale. I understand that he stripped anything of value before he abandoned it.

JimmiB….I didn’t know there were Messicks in Lebanon. I reside in Camp Hill. The fire that I am referring to is the HACC fire. I remember the “investor” who bought the Colonial at the tax sale. He claimed all he had was Social Security to live on. What is a painted flat?

JimmiB and Hillary…What do you remember of the State? What was it like on the inside?

John, painted flats are large canvas sheets with scenery painted on them, and hung on the stage for live performances. The flats from the Academy may very well have dated back to vaudeville. I’m pretty sure one of them was full of advertisements. I don’t remember much of anything of the State theater before its conversion to nightclub (called “On Stage” with a clever sign alteration).
For the record, when all the controversy was brewing around the condition of the Colonial, my husband and I were granted access. This was after it was “stripped” of all its valuables. At least some of the flats were still there, hanging behind the curtain. The person who escorted us (one of the salvagers) told us by the time he got in there, the valuable fixtures in question were already removed. All he got out of the theater were some cast iron seat ends which he restored. I can tell you what we saw would have made you cry. I can’t believe there was ANYTHING of value left by the time the “investor” bought it; whatever remained was severely damaged by exposure. It’s a shame because that was a beautiful and (for its time) a well-appointed theater.

Hillary….after I posted, it dawned on me what a flat was. Thank you. Isn’t is something that man can build great things and then let them fall into reuins. Seeing photos on Cinema Treasures of movie theatres when they are new and have just been opened, and then seeing them in ruins really breaks the heart.

I was in the State building one time for my wife’s class reunion. This is after it became “On Stage”. It’s last hurrah as a movie theatre was X rated films. I can’t find anything on the fire that destroyed the back of the Academy, but my wife says it was in the fatal fire that destroyed the buildings from 7th street up to the Academy. Probably about 1986. After the HACC fire, the rest of the half block was demolished for the new HACC campus.

Agreed John. Every time I drive through 9th & Cumberland, I think of the song that goes, “They tore down paradise and put up a parking lot.” Literally, a shame.