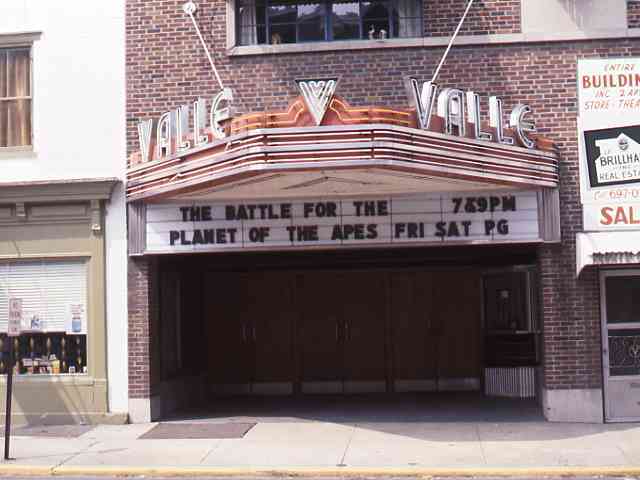 The Valle Theatre opened April 20th 1948. Owned by Walter F. Yost Theatres. The Valle Theatre was managed by Mrs. Robert F. Handley, mother in law of Yost with the assistance of her daughter Pauline.

The theatre is of cement block construction with all steel roof and seven all steel door exits. Forty-five x 192 feet, overall the building houses in addition to the spacious auditorium, a large lobby and foyer, mens and ladies restrooms, large projection booth, two apartments an a store room.

The color scheme of mulberry, blue, copper and gold has been followed throughout. The cashiers booth, built into the wall, opens directly into the lobby, providing easy access and heating for the cashier. The marquee and name sign are of maroon and black glass with chrome trim. In the lobby is a popcorn and candy counter.

The projection booth was equipped with two Super-Simplex machines. Peerless magnarc lamps, and a RCA sound. An emergency lighting system by Kohler was also installed.

The Valle Theatre was the fifth theatre in the Yost chain. The same firm owning the Grand, Penway and Roxy theatre’s in the Harrisburg area.

The Valle Theatre was closed in 1978.

Just to add a couple of things to John’s submission: Walter Yost also owned an existing theater in Mechanicsburg, the Paramount, seating 390. The Paramount was closed eventually but when the Valle opened, they switched the Paramount to a format of westerns. Does anyone know where that theater was located?

The 1945 Film Daily yearbook lists yet another theater in Mechanicsburg, called the Mt. Vernon, with seating at 1000. That may have been a mistaken listing, but who knows?

I took a tour of the Valle in the 1980s, long after it was closed, with the dream of reviving it. There was no power and we went through using flashlights, from projection room to basement. There were no seats and the floor had been converted to tiers for a short-lived nightclub. Only one of the two projectors was in the booth.

It was a little spooky in the half-dark but from what I could see, the Valle had been a very nice theater at one time with a number of attractive touches, like floor-to-ceiling mirrors in the lobby, glass blocks with neon lighting on either side of the aisles, and a water fountain with pink flamingos on the mirror above it. I had seen the small marquee lit up at some time or another but unfortunately it had been hit by a truck and virtually destroyed. It had been a real beauty too.

I passed on it, thinking it was too much to take on. I’ve always wondered why the Valle wasn’t able to survive, like the West Shore has. If it could be done in New Cumberland, why not Mechanicsburg? The communities are similar. Unfortunately the Valle is all gone now with no chance of bringing it back.

One other thing: was the name said “valley,” or as someone once said it to me, “va-LAY?”

Thanks John for adding to my write up. The lobby area now houses the Potomac Bead Company.