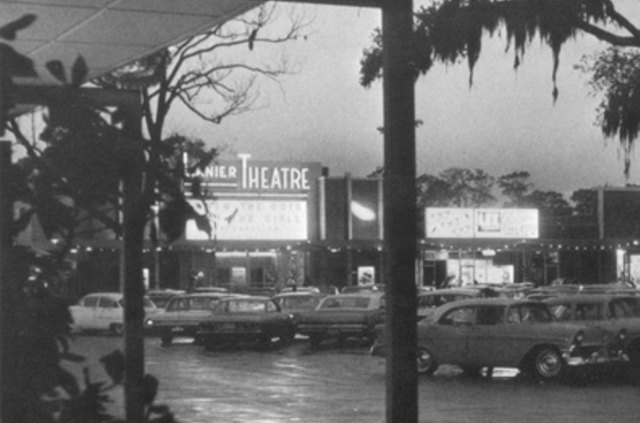 The Lanier Theatres closed when the Glynn Place 11 opened in 1998. The theatre is now used for retail and office space. Any further information on this theatre would be appreciated.

I was sorry to hear that the Lanier Theater closed. Decades ago when my mom and dad drove us to Florida for vacation we always spent an overnight in Brunswick (at the now demolished Oak Park Quality Court — complete with Howard Johnsonâ€™s Restaurant on the edge of the parking lot). At some point in the day we normally ended up shopping in the Lanier Plaza, which was at that time complete with Winn Dixie supermarket, Eckerd Drugs, a Laundromat and small Sears store. In the southwest angle between Sears and Winn Dixie was the Lanier Theater. One evening, circa 1970, my parents took us to see the re-release of Walt Disneyâ€™s Pinocchio at the Lanier. That was when the Lanier was a large single screen cinema.

Fifteen years later I was living in Georgia while assigned to Fort Stewart. Shopping in Brunswick was always a good weekend alternative when compared to battling pay-day crowds in Savannah. When in Brunswick the Lanier Theater was always our first choice for movies. At that time (1985 â€" 1989) the Lanier was a twin cinema that offered reduced matinee prices. The first film I saw there was PALE RIDER. Over the next four years we went to see numerous movies at the Lanier including BATTERIES NOT INCLUDED, WHO FRAMED ROGER RABBIT?, SPIES LIKE US and MURPHYâ€™S ROMANCE.

The Lanier Theater was just off of US Highway 17 close to the turnoff for St. Simonâ€™s Island and en route to the old Lanier Lift Bridge and thence to the Jekyll Island causeway. Highway 17 was the main coastal route to Florida in the years before Interstate 95 coursed several miles west and was completed in 1979.

In 1988 construction began on an additional wing for the Colonial Mall at Glynn Place. I surmised the Lanierâ€™s days were numbered. The mall expansion included a larger food court, additional store fronts, a hotel, full sized carousel (which was removed some years later), and a modern multiplex cinema. Stores and motels/hotels on old US Highway 17 in Brunswick had already gone through a period of decline including the demise of the Shoneyâ€™s restaurant. I am surprised the Lanier was able to hold out for an additional ten years.

Over time old movie houses have been forced to make the transition from well designed comfortable single screen theaters to cramped multiplex cinemas. Those that have made the transition become little more than tiny auditoriums with pictures not much better than that of a good wide screen HD television. Despite claims of Dolby Sound the acoustics tend to be poor and sound from adjacent auditoriums penetrates the thinly insulated walls. Theaters like the Lanier were not designed to be retrofitted as shoe-box cinemas. Retrofits ultimately lose business unless they command prime real estate, such as the Boardwalk Cinema (literally on the Boardwalk) in Wildwood, NJ. The decline in shoppers at the Lanier shopping center no doubt also contributed to the theaterâ€™s demise.

The Lanier will be missed.