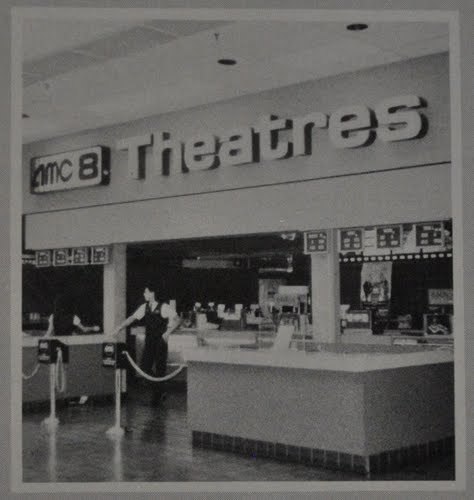 Opened February 16, 1979 as part of the Cross County Mall at the heavily travelled intersection of Okeechobee Boulevard and Military Trail. AMC took the next step from its 1970’s mall sixplex style with Cross County’s eight-screen layout, and slight improvements to its "tube" design. As with other AMC locations in Broward and Palm Beach counties, it served as a fellow anchor to Britts and Jeffersons department stores.

With both stores out of business by the mid-1980’s, the theatre then held out against competition from two nearby UA multiplexes (Mall Cinema, Movies at Village Green). The Cross County 8 closed in the 1990’s, demolished in a reconfiguration of the shopping center.

I managed this theatre for a few months around 1987-1988. It was haven for the Century Village crowd in a tacky mall. We did have fun when “School Daze” opened and a hip black crowd showed up and danced to “Doin' the Bump” at every performance.

Century Village once had a closer, smallish neighborhood theater, the Century (later the Century Twin) near Okeechobee Blvd. and the Turnpike. Think that one was gone by the mid 80s. Nowadays, local movie fans have to rack up extra miles to either State Road 7 (Regal Royal Palm Beach) or U.S. 1 (Muvico Parisian) to get their fix. Century Twin, Cross County, Plaza, Mall Cinema, Movies at Village Green, Okee Square — all wiped out.

A 1979 Palm Beach Post article just happens to contemplate the area’s “overscreening.” I didn’t know the Village Green (typical interchangeable UA 70s sixplex) and Cross County opened within months of each other.

It was the UA four-plex that opened within months of the Cross County. The much newer UA Village Green really hurt the dog-eared older AMC Cross County when it opened as it attracted the younger suburban westward neighborhoods.

As usual, arrogant egocentric AMC blamed the managers for the drop in business.

UA really took a bath on Okee Square 8, on Okeechobee nearer to I-95, replacement for the Village Green and Mall Cinemas. Think they just had a few years before Muvico Parisian opened nearby in the late 90s, just in time for UA to hit the skids. Local startup BMC took Okee Square over but they couldn’t turn it around. Last I heard, it’s still vacant.

This theatre opened on my birthday