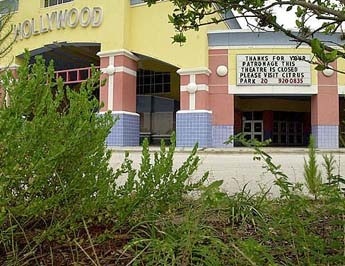 One of the shortest lived theatres of the modern era, the Hollywood 20 opened October 31, 1997 and was closed in November 2000. With it’s state of the art Post-Moderne style architecture nestled forlornly among the weeds, it presented an incongruous picture. Why was such a large modern facility so short-lived?

At some point after 2005, the complex was demolished and replaced by a Kohl’s department store.

Contributed by David A. Litterer
Get Movie Tickets & Showtimes

I got my bicycle stolen here.

Another note: The last time I saw this place, it was 2004, and I had walked up to the former box office to peer through the window and reminisce a little. I was thinking about all the bad movies I had paid to see there when a crazed movement caught my eye from inside a shelf within the box office. It was a large cat which appeared to be in heat… That’s when I knew that there was life after death.

This was opened by Cobb theatres before it was sold to Regal later in 1997. Last day of performances is December 20th, 2000. Regal cinemas took out their stuff and “threw away the key” without locking the doors. The county put up a fence later.

TAMPA – The theater has been targeted for closing for some time, a Regal executive said.

The curtain is closing on Regal Hollywood 20, one of the first mega-plexes to take root in a burgeoning area of Lutz.

The glitzy cinema-plex, in the Northgate Square shopping plaza at Van Dyke Road and Dale Mabry Highway, will turn off the lights for good Dec. 10.

It has been targeted for closing for some time, he said, as the corporation evaluates its properties for profitability. In June 1999, the company closed its Northdale Court 6 cinema on North Dale Mabry Highway.

Regal Cinemas, based in Knoxville, Tenn., operates seven cinema complexes in the Tampa Bay area, including the Regal Citrus Park 20 at Citrus Park Town Center, which opened last year. There are no immediate plans to close other locations, Westerling said.

As for the employees of Regal Hollywood 20, he said it is corporate tradition to offer them jobs at other Regal cinemas.

Regal also will operate a 10-screen movie theater and Imax at the Channelside entertainment-retail complex along the Tampa waterfront. That project was slated for 15 screens but was scaled back to 10 screens. Its opening has been postponed several times; the new target is mid-January.

Regal Hollywood 20, open since October 1997, is in a stand-alone building on the west side of the shopping plaza.

I saw “Titanic” and “Gone With the Wind” here. A friend told me just about the entire community of Lutz was there on opening day. Hard to believe a 20-screen complex with a life span of only 3 years. It’s understandable the theatre was said to be in an “underperforming location.” When Cobb opened Hollywood 20 much of the surrounding area was still underbuilt and underdeveloped. And Regal filing bankruptcy during that time doomed Hollywood 20 to a short life span.

They should have just waited to build the theater until the town was more developed. Regal would’ve been able to build a theater like the one Cobb had planned, even if they waited a few years later to do it.

I frequented this theater when I first got married and lived in the nearby lake Carlton Arms apartments. Saw Titanic here on Opening Night. I recall the theater had an ice sculpture of the ship and several other promotions for the film (which back when it first opened, was predicted to be the next Waterworld-style expensive flop).

I remember seeing Godzilla ‘98 here too…lots of promotion then too including film cells with ticket purchase and a CD-Rom with goodies.

I always thought the theater was built relying on further home development all around the area which never really materialized, even to date.

This opened on October 31st, 1997 by Regal Cinemas. Grand opening ad in the photo section.