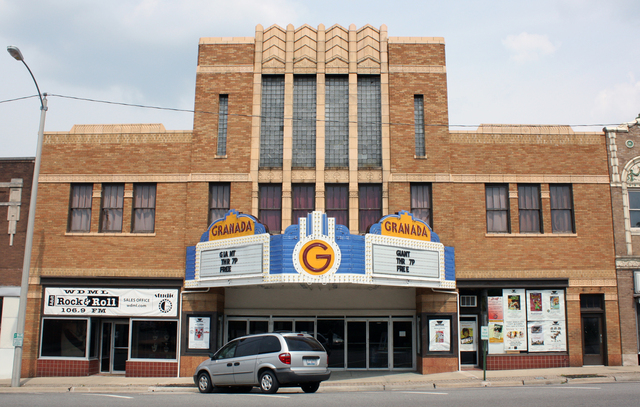 The Granada Theatre was designed by the Boller Brothers opening December 16, 1937. In 1971 it was taken over by Kerasotes Theatres and was twinned in 1981. It was closed in 1995.

The Granada Theatre was renovated for use as a community center, which had closed by May 2017 when new owners took over. There are hopes it will reopen in 2018.

There did not appear to be a lot of work going on presently at the theater, but there was a scissors lift in the lobby and a front end loader in back, so perhaps something is going on. This looked like by far the coolest of the three theaters along this street, and seems to retain an abnormal amount of decor, at least in the lobby. The chandeliers are particularly fantastic. I hope this project pulls through, it looks like a very worthy theater!
Photos at http://www.flickr.com/photos/tags/ctid3205/

I used to work at this theater when I was a kid … closed the doors on its last day as a movie house. Good to see that there are people working to fix it up as it has lots of potential to be a beautiful landmark for the area.

Does anyone have any contact info for the people who are working to fix it up?

Astromonkey, David Lister can be reached at He’s the guy in the know. The group also has a list serve: If you want to be added to the list serve, you can e-mail with that request.

I just shot some photos of the Granada Theater on my trip through Southern Illinois this Summer. Here’s a link to them on my Flickr page.

Hello everyone…. I just thought I would give you a quick update on the Granada Theatre in Mt. Vernon. As of May 1st, 2017 I purchased the theatre with the intention of updating the interior, exterior and expanding it’s uses to include live performances and event rentals (wedding receptions etc…). You can find out more at our website http://thegranadatheatre.com. There are links to social media as well as a signup form for our mailing list. Thanks for the photos! They are really cool and I hope you can all come visit someday!

P.S. I found tons of historical images and made several facebook albums with them. You can find them here:

A 1995 article about the history of Mount Vernon’s theaters can be found on this web page. It says that the groundbreaking ceremony for the Granada was held on June 7, 1937, and the theater had its grand opening on December 16.

In 1971, the Granada and the Stadium were taken over by Kerasotes Theatres, which had for some time already operated the Mount Vernon Drive-In. The Granada was twinned in 1981. In 1995, Kerasotes built an 8-screen multiplex in an outlet mall on the outskirts of Mount Vernon, still open now as the AMC Classic Mount Vernon 8, and the Granada was closed after a run of almost sixty years.

The Granada’s restored marquee in action. The house hosted a fashion show on May 26, but I know of no other events since then. The official web site has not been updated.