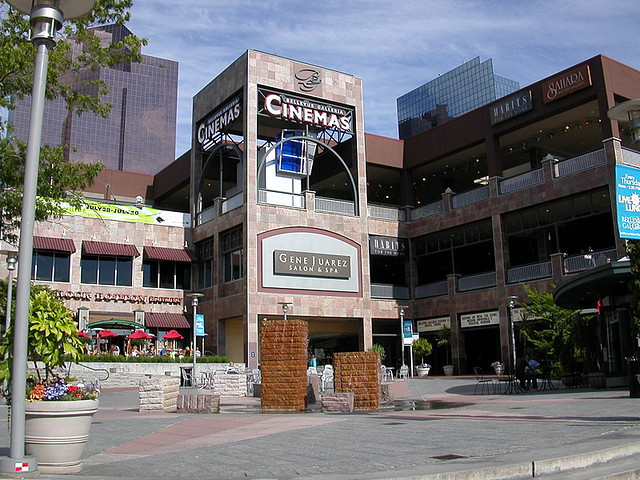 Located on the top floor of an open-air complex in downtown Bellevue, the Galleria 11 was opened in April 1999. It was operated by Regal Theaters for several years before being sold to Hallett Cinemas, and closed down on April 3, 2008 due to competition from the newly opened Lincoln Square 16.

EASTSIDE BUSINESS DOWNTOWN BELLEVUE JOINS GROWING SILVER-SCREEN SCENE
When the Galleria 11 Cinema opens at the Bellevue Galleria on Friday, it will do more than bring the entertainment center to life.It also brings downtown Bellevue into the dramatic boom in the movie business on the Eastside.The number of movie screens has more than doubled since 1994, and still more are on the drawing board. If either of two large developments is built as planned within blocks of the Galleria, the east side of Lake Washington will have three times as many theaters…

They open the Lincoln Square Cinemas (16). They did better then Bellevue Galleria (11). Now it’s closed.

It’s a shame that this place closed so soon after it opened (less than 10 years). It was a great addition to downtown Bellevue, a city of 120,000 that should have room for more than one multiplex downtown. The theatres and facilities were state-of-the-art at the time.

Lincoln Square Cinemas, which apparently put this place out of business, tends to multiscreen many of their films, which means many of the additional big titles that the Galleria would’ve picked up no longer have a home in downtown Bellevue.

If you have any curiosity about what the Galleria looked like, check out the almost-identical Regal Parkway Plaza 12 near Southcenter, which is still open (though maybe not for long given that the Southcenter 16 seems to be threatening that theatre too!).