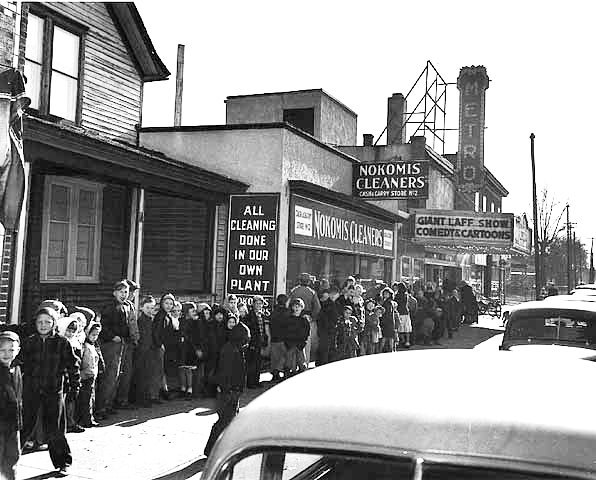 The Metro Theatre was opened in 1931. Later operated by Mann Theatres, it was closed in 1955.

Any further information on this theater would be greatly appreciated.

The Metro is listed under independent theaters in this May 1934 ad:
http://tinyurl.com/ybagbaa

Dave Kenney’s Twin Cities Picture Show: A Century of Moviegoing lists a house called the Elite Theatre operating at 2517 27th Avenue S. from 1912 to 1929, and lists the Metro Theatre at 2519 27th Ave. S. from 1931 to 1952. He doesn’t list them as aka’s for each other (he usually does list aka’s), so, if he’s correct, the Elite must have been demolished to make way for the Metro rather than being remodeled to become the Metro. That seems quite an extravagance for economically depressed 1931, though. The roof on the Metro’s auditorium section is of a sort that might have been built in either period, so it offers no clue.

The House of Kolor website contains a small photo of the Metro theatre in its days as an auto paint shop: http://www.houseofkolor.com/about/about.jsp