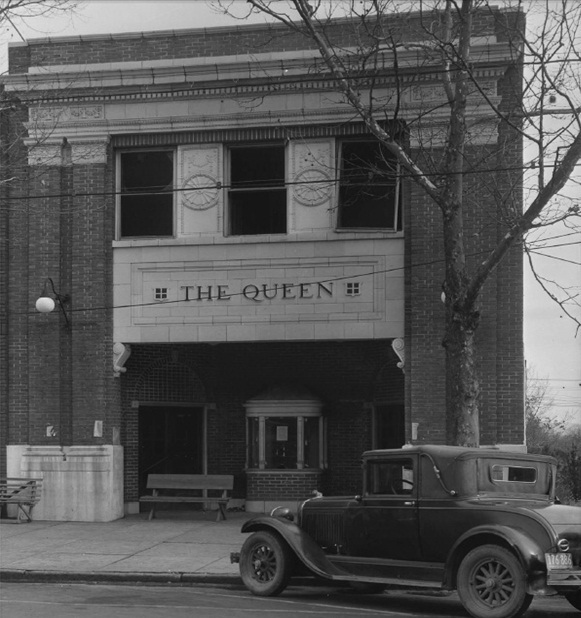 Guys the information on this theatre comes from the website http://docsouth.unc.edu – then click on Going to the Show and then the name Erle Stillwell.

Coming Friday Jan 1955 to the FOX “SHADOWS OF TOMBSTONE” with Rex Allen and his wonder horse KOKO.

Tom Orr writing in the TIMES-NEWS writes of a tour he was given by the owner of the building the QUEEN was in.The Projection Booth still has the Projectors!June 10 2012.

Orr also added that the projectionist at the time the late Raymond Clouse let his daughter in the booth to watch “JAILHOUSE ROCK”.Other Employees on an old time card are Richard Waters and Joe Orr.

Architect Erle Stillwell was born in Missouri ,but raised in Hendersonville.The Depression of the 30’s began a big collapse in his career,It was designing Movie Theatres in North and South Carolina,Alabama and Tennessee that saved his career designing 60 Theatres in this region.

A lot of Stillwell’s Theatres fell under the Paramount Banner in the Southeast.

Technically, the theater’s grand opening was July 1, 1915. It was given a major facelift closing for period from November 15, 1921 relaunching as the remodeled Queen Theatre on July 3, 1922. The Queen’s name continued over at the Rialto on those dates with that theater changing back to the Rialto on July 3, 1922. The Rialto started Saturday only operation in September and closed prior to year’s end. Grand opening ad for the Queen in photos, as well as ads for the Rialto Theatre, as well as the precursors to those theaters in Hendersonville: the Grand Theatre and the Opera House.

The Queen Theatre was gutted by a fire on February 21, 1933. In 1934, Carolina Theatres Circuit acquired the venue using only the original four walls and foundation from the Queen used to create the State Theatre. The State launched on December 24, 1934 with Wheeler and Woolsey in “Kentucky Kernels,” along with the Warner Bros. cartoon, “Funny Little Bunny”, the short with Lionel Stander and Shemp Howard, “Pugs and Kisses,” and the travelogue, “Journey in Flanders.”