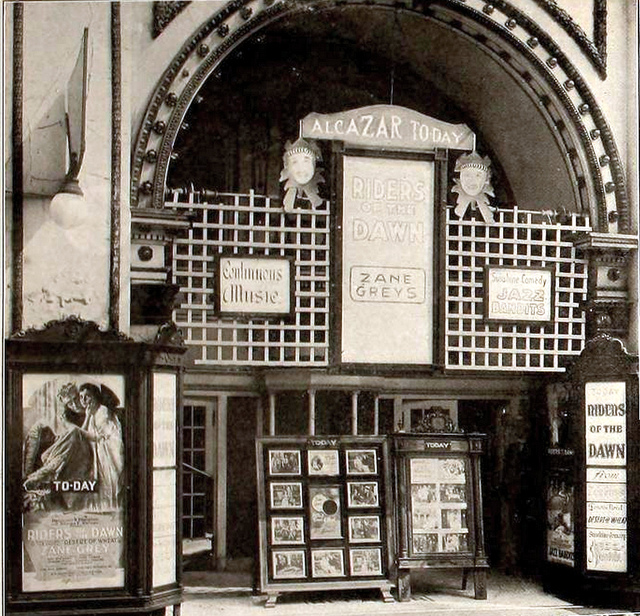 Opened as the Alcazar Theater on December 23, 1912 with Old Badger in “Before the White Man Came”. Seating was listed at 360. This theatre was located next door to the much larger Strand Theatre. It was renamed Capitol Theatre on June 4, 1923.

In 1955 it was still operating as the Capitol Theatre. It was last renamed Newmar Theatre, and has since been demolished for renewal.

Here is a photo of the Capitol Theatre dated 1939.

The web site Birmingham Rewound says that the Capitol had earlier been called the Alcazar Theatre, and for the last few years of its operation (from 1948 until some time the early 1950s) was called the Newmar Theatre, a name that was moved next door to the Strand Theatre when the Newmar closed.

Here is a photo of the theater as the Alcazar, dated 1920.

The Strand was demolished to make way for a parking garage in 1963, and presumably the Alcazar/Capitol/Newmar came down at the same time, if it had not already been razed.

During its last few years as the Newmar, this small theater sported a splendid Streamlined Modern front with a rounded marquee. A photo of it is on the Birmingham Rewound page.

I’ve found text references indicating that the Alcazar was in operation in 1918, but it was probably several years old by that time. Its architectural style and narrow frontage mark it as being from the first wave of movie theater construction, so it probably predated the larger Strand next door by at least a year or more.

In 1946, I used to catch the #1 Bessemer street car and go to the movie in Birmngham. The three theaters I went to were The Capital,The Galaxy, and The Strand, three theaters in a row on Second Avenue. These theaters would show shorts of Laurel and Hardy, my favorite at the time. I left Birmingham in 1954 and do not know the outcome of these three theaters.

A mid-1920’s ad for Reproduco organs lists The Capitol Theatre as one of their satisfied customers. However, I infer that is NOT this theatre if it was the Alcazar in the 1920’s. There must have been another theatre called The Capitol.

Will Dunklin, apparently the Alcazar (Empire?) Theatre had a 2 manual, 7 rank Kilgen organ installed in 1919. This info is from the TheatreOrgans.com database.

I have no idea what became of this organ and its opus number is unknown. Any other info is appreciated!

The latest mention of the Alcazar I’ve found in the trades is from Exhibitors Herald of March 3, 1923, and the earliest mention I’ve found of the Capitol is a Birmingham Newsitem of June 23, 1926. Birmingham Rewound doesn’t give a date for the Alcazar’s name change to Capitol, but it’s quite likely that it took place in the 1920s, before the Reproduco was installed.

I take it that the Kilgen organ installed in 1919 would have been larger and more valuable than the Reproduco. Perhaps the Kilgen was moved to a new, larger theater and it was replaced by the smaller Reproduco at the 360-seat Capitol?