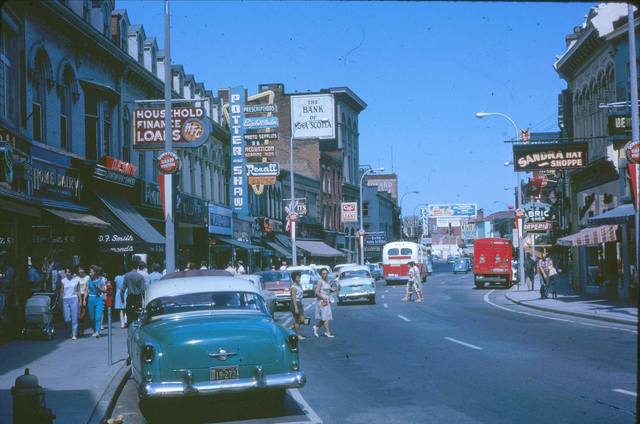 The Allen Theatre was opened on April 26, 1920. It was designed in an Adam style by architect Howard C. Crane, with the local firm Kiehler & Schley, for the Allen Theatres chain.

Taken over by Famous Players and re-named Capitol Theatre, it was remodeled by the architectural firm Kaplan & Sprachman in 1934. It was closed in 1965. It was demolished by 2014.

I was only in this theatre once. I saw the Deborah Kerr film “The Innocents” there during its first run. The building reminded me of the Music Hall theatre in Toronto Canada, and neither one could be described as being an art deco structure. Incidentally, the Music Hall was originally know as the Allen Danforth.

This has been demolished. Modern commercial builsings on the site.

Mr. Les E. Mitchell who became a Vice-President, Operations of Famous Players Limited, was manager of this theatre for a time in the early 60’s. When Mr. Mitchell was listing all of our theatres for correspondance distribution — he would always list it as Capitol Theatre * St. Kitts — rather than St. Catherines!!

1962 photo of St. Paul Street added, courtesy of the Growing Up In Western Hill!!! Facebook page. Capitol Theatre marquee in the background.