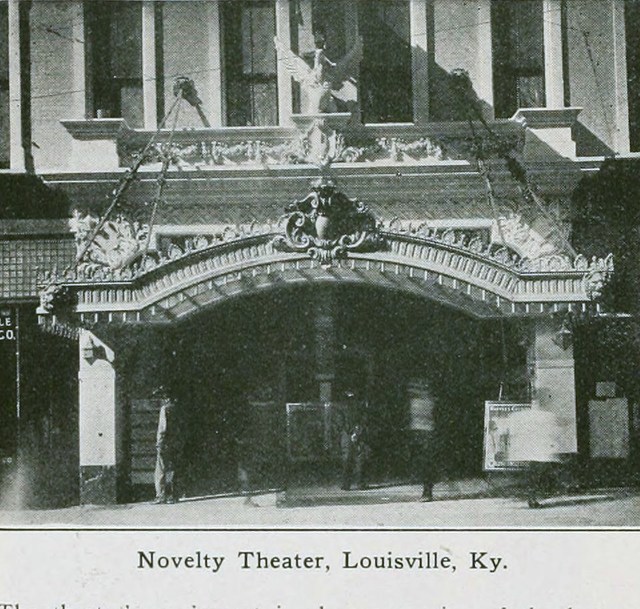 The Novelty Theatre was located on S. 4th Street at W. Chestnut Street, just down from the Palace Theatre. It opened in early-1912. In February 1916, it was remodelled and reopened as the Rex Theatre, with seating listed at 700.
The theatre was operated by Dolle & Sturle from 1930, Fourth Avenue Amusement Co. then operated the theatre until it closed in the early-1950’s.

The theatre was later demolished.

The Rex Theatre was built in 1911 as the Novelty Theatre, as reported in the July 29 issue of The Moving Picture World:

“Work of construction was commenced last week at 410 South Fourth Avenue, Louisville, where The Novelty, a $30,000 theater, to be managed by the 3-Falls-Cities Amusement Company, will stand. The old building, which occupied this prominent downtown site, has been razed and by September 15, one of the handsomest moving picture houses in the South will have been reared. M. Switow, president of the 3-Falls-Cities concern, says that no expense will be spared to make the Novelty one of the most up-to-date establishments below the Mason & Dixon line.”

The Novelty suffered construction delays, and didn’t open until early 1912. Here is part of the article about the opening in The Moving Picture World:

“The newest, one of the largest and one of the most magnificent moving picture theaters in the entire South, was opened recently in Louisville, Ky., in the heart of the retail shopping district. The new showhouse is called The Novelty. The house is extremely novel from an architectural standpoint. The dimensions of the structure permit of its being a real theater. Its capacious lobby and commodious auditorium are richly furnished. The auditorium is a marvel of novelty. Comfortable seats, spaced well apart, broad aisles, and an interior that is as bright as day even while the pictures are being shown, combine to make the Novelty interior emblematic of the name of the house in the highest degree.”

After several changes of operators, the Novelty Theatre was remodeled and reopened as the Rex Theatre in 1916, as reported in the March 18 issue of The Moving Picture World:

“The remodeled Novelty theater, of Louisville, under a new title, ‘The Rex,’ was re-opened to the public on Sunday, February 26 as an exclusive ‘Mutual Masterpicture De Luxe’ feature house.

“The theater has been thoroughly renovated, painted and decorated, and the seats have been covered with white canvas jackets. The house, now makes a very attractive appearance, and night admission prices have been advanced to fifteen cents. Manager Koch reports that the advanced price is being tried out, and it is probable that the old price of ten cents will be put back, as there are too many theaters in the district showing at ten cents.”