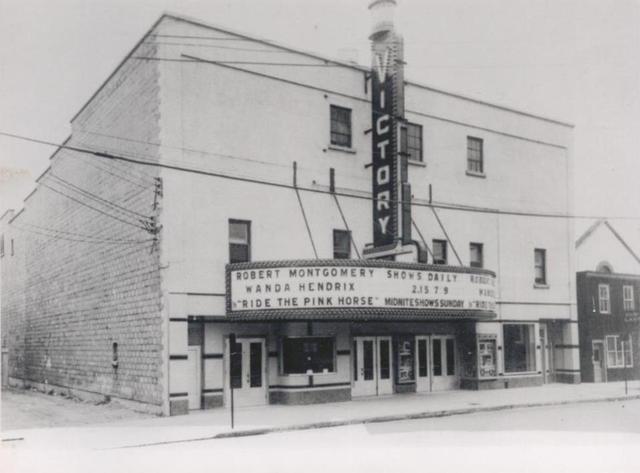 The Victory Theatre certainly stuck around later than 1991, as I remember seeing “Batman Returns” twice throughout its opening weekend in June of 1992. I can’t remember seeing anything else there throughout that summer, but I remember seeing “Unforgiven” and “Rapid Fire” on the bill in late August. All of my film-going memories after that take place at the neighboring Cinema Six, so it may have closed sometime in the fall of 1992.

The Attic was one of the side clubs. The main chunk of the former cinema became a club called “Amigos,” which was a sad, sad affair. I only went in there once, because I didn’t want to pollute my memories of the place I’d cherished so much as a kid.

The Victory Theatre was to be built in 1939 but when the war started the basement was covered over and it was finally completed after the war in 1947. The architect of this theatre Abraham Kaplan of the firm Kaplan and Sprachman. The owner of this theatre was Leo Mascioli theatre magnate from Timmins, Ontario. It was operated by his company Timmins Theatres Limited in association with Famous Players Canadian Corp. Leo Mascioli had 5 big theatres going all at the same time in Timmins: The Broadway, The Cartier, The New Empire, The Palace, and The Goldfields. Famous Players threatened Mascioli and tried to put the squeeze on him so in 1937, Mascioli joined Famous Players as a partner.

The architectural firm for the Victory Theatre was Kaplan and Sprachman from Toronto. The Victory Theatre’s original name was supposed to be The Granada. But after the war it was decided that it should be named VICTORY because we won the war!

33 Cedar St S is the address