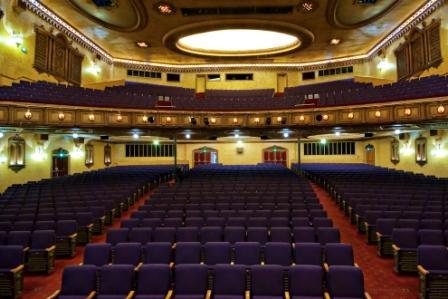 Built as part of the Town Hall complex, the Civic Theatre was opened on 12th December 1929 with the ‘100% talkie sensation’ "Behind the Curtain". The building contained 14 shops along Hunter Street, which brought in extra income.

The decorative scheme of the 1,723-seat auditorium was in a modified Empire style, with Spanish/Moroccan overtones. There is a large ornamental dome in the ceiling, and huge recessed arches over the Royal boxes which flank the stage. Designed for both live theatre and cinema use, the stage is 91 feet wide and 39 feet deep. The proscenium, which has a Classical frieze is 40 feet wide.

First operated by Northern Amusements, it came under the control of Hoyts Theatres chain in 1941. Hoyts closed the Civic Theatre as a cinema on 10th October 1973, and it was taken over by Newcastle City Council. The building was now Listed by the National Trust as an historic building. It was converted into a live theatre and continues in this use today.