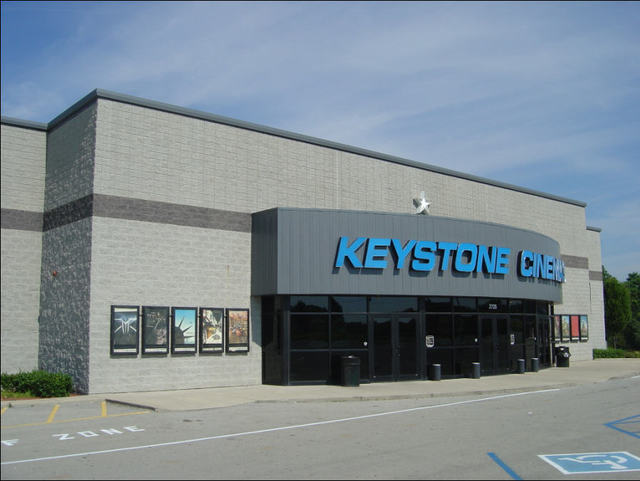 The 8 screen Keystone Cinema was opened on December 17, 1999. This is an independently operated cinema with seating listed at 1,480. The theatre features first run attractions. It was closed on April 28, 2022.

A photo of the Keystone Cinemas at Bardstown appear on this page of the web site of Lee Brick & Block, the company that made the concrete masonry used in the building. There are also a couple of closeup photos.

The pandemic has presented many challenges to all businesses – few more so than the movie theater business. The advent of streaming media and content is pre-Covid, but it’s (sic) acceleration due to the pandemic is truly remarkable. This acceleration has resulted in a dramatic increase of subscribers to many media/content platforms – Netflix, Disney+, Amazon, just to name a few. Disney, for example, controls nearly 60% of the total box office revenue domestically and recent statistics show they have 130 million subscribers to their Disney+ service. These venues need content to keep their subscriber base satisfied and this in turn impacts which films go to the theater and which ones go to their streaming platform(s). Keystone Cinemas has shown approximately 120 movies a year for the past 21 years. We are being told we can expect at least 40% less in the future.

We have reached out to fellow theater owners, local business people, banking institutions, and tourism/government officials in an effort to keep this entertainment option open and available for our community. We have been unable to find a new owner who is willing to take on the challenge of running a small-town theater and making the needed investments to make it viable in years to come.

It is with considerable regreat we are announcing the sale and closing of Keystone Cinemas. I have been approached by a non-theater entity who is willing to purchase the property as is.

Keystone Cinemas opened December 17th, 1999. Our final date of operations for the public will be April 28th, 2022. We have had a great run – Over 2500 movies shown to over 2.5 million loyal customers. Forever grateful, we are……