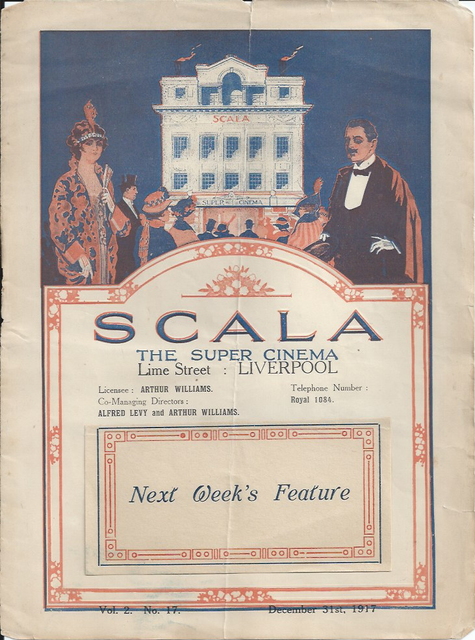 Located on Lime Street, adjacent to the 1912 built Lime Street Picture House/Futurist Cinema. The Scala Super Cinema was opened on 16th January 1916, and was the second cinema to be opened by Sol Levy, after his Scala Cinema, Birmingham.

The cinema had a Classical style façade, and the auditorium was in an Egyprian style. Seating was provided for 400 in the stalls and 220 in the circle, which had side-slips extending to the proscenium, leading to exits. In 1920, a new company was formed (Futurist Liverpool Ltd.) and the Scala and Futurist came under the same ownership. The Scala Super Cinema screened its first talkie on 8th July 1929; George Jessell in “Lucky Boy”.

In 1941, the Scala Cinema was closed for six weeks, due to damage from German bombs. In the early-to mid-1950’s, the Scala Cinema screened mainly second run films, together with ‘X’ certificate films. It was leased to Twentieth Century Fox in 1955, and became the second cinema in town to be equipped with CinemaScope (the first being the adjacent Futurist Cinema). The auditorium was altered, destroying most of the original Egyptian decorative scheme, removing the side-slip exits from the circle to enable a wall-to-wall screen to be inserted. It re-opened on 10th April 1955 with “Carmen Jones”.

By the end of the 1950’s there was not enough Twentieth Century Fox product to keep both cinemas running, and the Scala Cinema was dropped, and was taken over by Gala Film Distributers, becoming Mersyside’s ‘Continental’ theatre, screening Continental ‘X’ certificate films, and opened with “Sins of Youth” and the nudist film “Travelling Light”.

Gala left the building in 1962, and it continued the adult film policy under independent management until taken over by ABC on 3rd July 1967. The façade was ‘modernised’ to a plain façade with windows, and new signage stating ABC Scala EMI was installed.

It stood empty for several years, until 1987, when it was transformed into a nightclub, known as the Hippodrome. The interior was totally re-modelled into an Art Deco style. This closed in 1982, and it re-opened as another nightclub name Baraka in the autumn of 1997, which closed after 18 months. It then became an ‘adult’ gentleman’s club named ‘X in The City’ offering lap dancing. This closed in October 2015. The building was demolished in January 2017.

The former ABC Scala was demolished in January 2017.