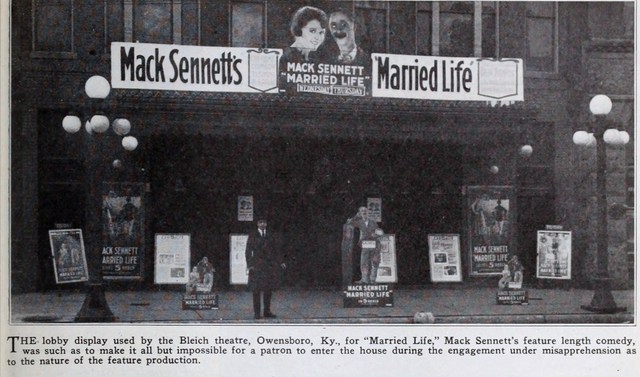 The Bleich Theatre was built by Geo. Bleich Ent. and was opened on September 20, 1920. Seating was listed at 798. This theatre was located just down the street from the Empress Theatre and Strand Theatre.

It went thru a couple different operaters before closing in 1956. Strand Amusement Co., Warner Bros., Wilby-Kincey and Malco Theatres.

The current introduction says the Bleich was down the street from the Strand Theatre, but it was actually a couple of doors from the Empress. A picture at the bottom of page 28 of Owensboro, by Terry Blake and David Edds, Jr. (Google Books preview) shows the Bleich between the Central Trust Co. building to the right, and on the left a one-story building that was between the Bleich and the Empress.

The Bleich Theatre was in operation by 1922, as it was only Owensboro house listed in that year’s Cahn guide, which said it offered both movies and legitimate stge productions. The Bleich Theatre was most likely the project noted in the January 15, 1920, issue of Manufacturers Record which said that a building at Owensboro, 45x134 feet, was being remodeled as a theater for George Bleich. W. R. Gatlin was the architect for the project.

There was a Strand Theatre located on Frederica just down from the Bleich Theatre. It housed the offices for the Strand Amusement Co. There was also the Grand, Queen and Kentucky in Owensboro.

This opened on September 20th, 1920. Its grand opening ad can be found in the photo section and below. 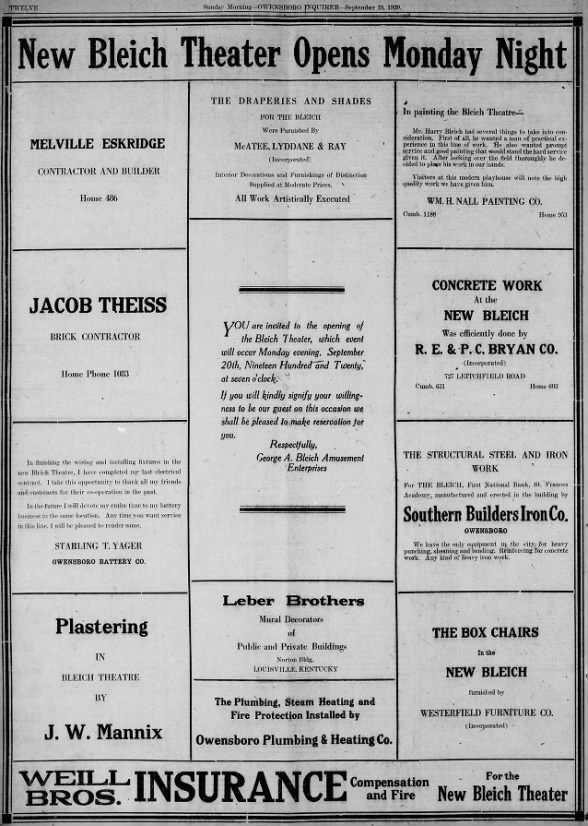