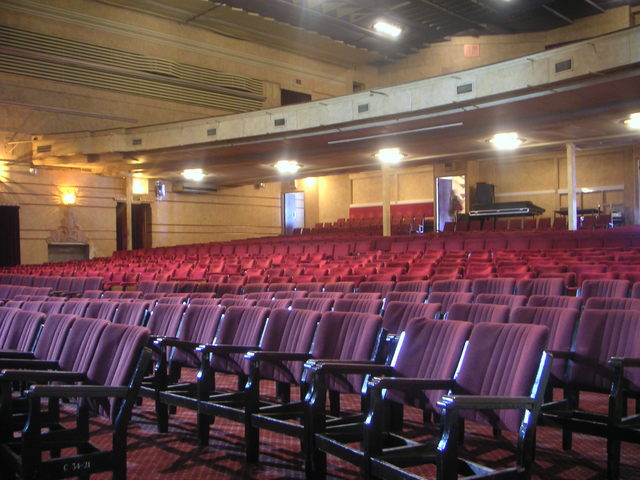 Located in the Sydney inner city district of Enmore. Originally on this site was a tin-walled open-air structure which was used to screen early films in 1912. It was roofed over within three months of opening, and enlarged to seat 500.

In 1921, a new theatre was built of brick and steel, designed by the architectural firm Kaberry & Chard. Seating was provided for 3,000, with 2,000 in the stalls and 1,000 in the circle. It was designed as a vaudeville & movie theatre. There were four boxes, each seating 12 persons along each of the side walls. The ceiling was not decorated, and had exposed roof beams. In 1927, it was purchased by Hoyts Theatre and re-named Hoyts Enmore Theatre.

In 1936, the theatre was re-modeled to the plans of architect Charles Bohringer in a stunning ‘jazz’ Art Deco style, with a seating capacity of 2,308. It re-opened on 27th March 1937 with Astaire & Rogers in "Swing Time" and Warner Oland in "Charlie Chan at the Opera".

Hoyts Enmore Theatre was closed as a full-time cinema on 6th February 1963 with Rosalind Russell in "A Majority of One". It remained opened only on Friday, Saturday & Sundays, and for a while on Wednesdays screening Western films on a ‘Ranch Night’. The final programme under Hoyts management was James Coburn in "What Did You Do in the War, Daddy?" which had a three days screening ending on 18th February 1967.

It lay empty for two years, then re-opened as the Finos Theatre, screening Greek films. This closed on 12th May 1984, and for a brief period of time it re-opened as an English language cinema again. Live shows were introduced and soon the films were dropped. It eventually became mainly a concert venue re-named Enmore Theatre, presenting unknown rock groups just beginning their careers and some well known top groups, as well as comedy nights. The theatre was given a full restoration in 2020.

On 2nd March 2022, a section of the stalls floor close to the stage collapsed during a ‘house’ full' concert by singer Genesis Owusu. The stalls seating had been removed so the audience were standing. Luckily, none was injured. The management said the collapse was due to recent heavy rains penetrating under the floor.

A vintage photograph from the 1920’s, of the original Kaberry & Chard designed Enmore Theatre:
View link

as a 15 year old assistant operator with 5 weeks experience I worked 2 casual day shifts at the Enmore in 1967 near the end of its life with heaps of screaming kids in the house.my memory of the projection room was quite spacious fitted with Kalee 21’s. I do recall my pay for a casual shift was $4.00.