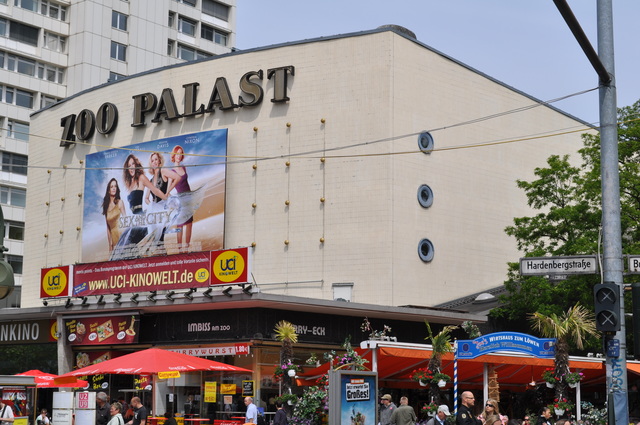 Built on the site of the Ufa Palast am Zoo which was destroyed by Allied bombs in November 1943. Opened as the ‘Bikino’ with 2 screens - the smaller one carrying the name ‘Atelier am Zoo’. The larger one is the ‘Zoo Palast’, traditional site of the Berlinale Film Festival between 1957 and 1999. The large 1,204-seat Zoo Palast auditorium opened on 28th May 1957 with “Die Zurcher Verlobung”. There were three sets of curtains; an orange main curtain, a Persian red ‘Premiere’ curtain, and a sky blue festoon (waterfall) curtain, when raised revealed a 10x20 metres wide seamless, metalised, Harkness wide screen. The cinema was equipped with three Ernemann-X projectors. The auditorium walls were lined with Mahogany wood paneling. The 550-seat Atelier am Zoo auditorium downstairs opened the following day with Burt Lancaster in “The Rainmaker”, presented in VistaVision.

It was for many years the highest grossing cinema in Germany with an average of more than 10,000 visitors per week.

In October 2009, the cinema and surrounding buildings were sold to a Munich based property development company, stating they would retain the original twin cinema, but demolish other surrounding buildings, including the seven smaller screens. The UCI Kinowelt Zoo Palast was closed on 31st December 2010, and was boarded up ready for re-development of the site. In August 2011 the buildings on each side of the cinema (containing the additional screens) were demolished.

I’m guessing that this is the theatre that actress Hildegard Knef mentions in her autobiography The Gift Horse when she talks about the disastrous premiere of her 1958 film for director Wolfgang Staudte, Madeleine und der LegionÃ¤r. Someone correct me if I err.

She wrote, “The premiÃ¨re took place in the newly-built UFA Palast am Zoo. The publicity and public relations offices had excelled themselves and the evening was launched with colossal pomp and ceremony; when the houselights went up at the end, however, the atmosphere was very similar to Pankow in 1946, at the premiere of Love at First Sight. Gingerly I took my bow and was heaped with UFA flowers by the cinema attendants and then sat in the manager’s office behind the stage listening to the doleful reporters' sporadic efforts to say something conmforting. No other representative of UFA was present at this conference…. Friends called and said how sorry they were that the papers, which, in a fit of self-preservation, I had not read, had placed the blame for the UFA catastrophe on me, surmising that the poor director had not a chance against the headstrong star and that therefore the bad script, amateurish camera work, inferior lighting and sets, could also be held against me.”

This cinema premiered “Madeleine und der LegionÃ¤r”,according to
http://www.deutscher-tonfilm.de/mudl1.html
Zoo-Palast opend with the comedy “Die ZÃ¼rcher Verlobung” (Getting Engaged in ZÃ¼rich/The Affairs of Julie)
in April 1957. It is one of the most interesting cinemas of the fifties in Germany. Close to the station “Bahnhof Zoologischer Garten” it is right in the heart of West Berlin. Although there are shops in the front, everybody would identify it as a cinema.
It seated 1204, is built in stadium style with steps and a slightly oval shape. You enter a big lobby
with stairs on both sides going up to the cinema. The screen and stage is just behind the front.
Nowadays it has lost a lot of its glory. It is sadly refurbished and the front needs new paint.
When I visited it first in 1979, the seats were yellow. There was a oval ceiling with indirect lighting.
Walls were mostly made of wood. I went to the Bond movie “Moonraker” at a saturday night with
a lively and packed house.
Now they changed colours, installed pink seats, painted the ceiling white. Indirect lighting is gone,
the auditorium is sadly lighted, almost dark. The cinema and even the lobby and the big stairs are spoiled by poor looking floral design carpets. The worst thing is that they installed a smaller screen. The former one was about 20 meters long and 8 meters high and only slightly curved.
There were plans to destroy it, build shops or smaller cinemas into its shape, but it’s already destroyed
by the current owners. In former years it was saved by the Berlin film festival (“Berlinale”) which now
takes place in ordinary multiplexes.

An exterior view of the Zoo Palast in 2004:
View link

More infos and photographs on this theater (and many others) can be found on the German language only Berlin Movie Theater Guide – www.kinokompendium.de: Zoo Palast

Here is another photo:
http://tinyurl.com/32kxnh

Was there on the 25th April 2016, and had a look at the larger screen…and what a lovely, large and red interior, wide seats too. I then went to the screening of “Jungle Book” in the smaller and very quaint screen. This smaller room has the length & height of it walls as bookshelves, pick a book whilst waiting for the main-feature, and the reclining seats and four-seater couch-cum-settee was simply fantastic. The price of the ticket was 13.50 euros.