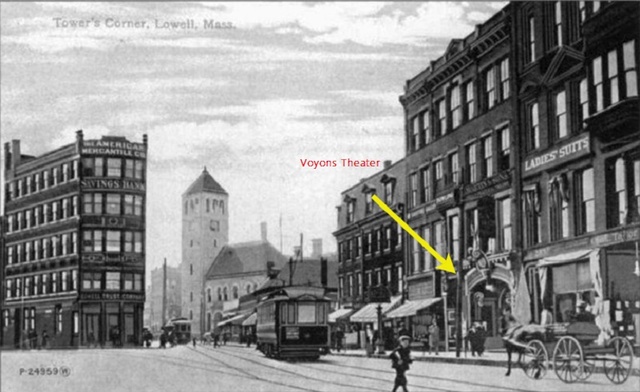 "Voyons" is the French word for "see." It was located in a four story brick building built by the Greenwood Brothers in the 1870’s.
According to Americanizing the movies and "movie-mad" audiences, 1910-1914 by Richard Abel, industrial films were prominent in Lowell as were natural history series. Pathe’s "famous" Wild Birds in Theit Haunts (in color) was advertised at the Voyons Theatre in Lowell. Yet travel films were by far the most popular of all. In Lowell, the Voyons Theatre gave its audiences views of distant countries from Finland to Indochina, while the Scenic Theatre offered nostalgic "tours" of Ireland and Naples Italy.

In 1913, Moving Picture World magazine reported that Mr. W. F. Gilmore, formerly associated with the Theater Voyons had switched over to Keith’s theater.

The site of the Voyons theatre and building is now occupied by Cappy’s Copper Kettle at 245 Central and Merrimack Valley Radio WCAP. The current building may be the original with the top two floors removed and a new facade.

Here are some area photos:
http://www.pbase.com/jroy/voyons

Actually, ‘Voyons’ would be better translated as ‘Let’s see’ or ‘Look!"

Thanks again J.V. and CWalczak.