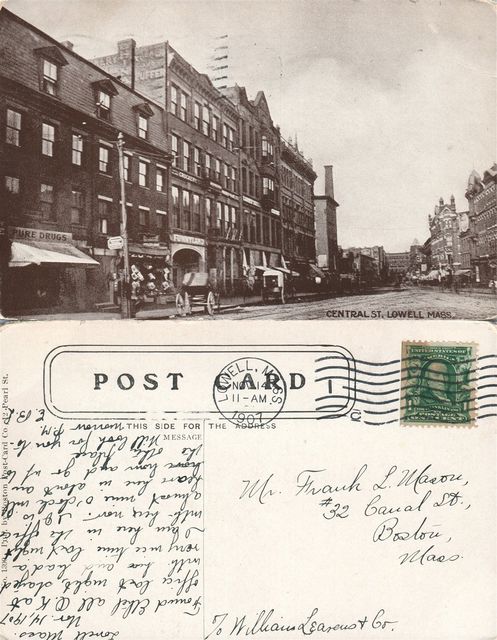 The Funnyland Theatre opened 245 Central Street by November 1907, in the four story building built by the Greenwood Brothers in the 1870’s.

Located next door, or upstairs from the Theatre Voyons it was renamed La Scala Theatre in December 1908 and was still operating in 1914.

Here are some area photos
http://www.pbase.com/jroy/voyons

Hennesy & Bunker’s Funnyland Theatre was mentioned in The Billboard of November 2, 1907, but no address was given. Theatre La Scala was advertised in the December 31, 1908 issue of The Lowell Sun, along with four other theaters. The December 4 issue of the paper had advertised the Funnyland Theatre, so the name change took place that month.

La Scala Theatre, managed by Hennesy & Bunker, was mentioned in the “Motion Picture Notes” section of The New York Dramatic Mirror of September 18, 1909. Hennesy & Bunker were also mentioned as managers of Theatre Voyons in the same column.

The house was styled Theatre La Scala again in a 1912 book about Lowell, as it had been in various issues of The Lowell Sun in 1909. La Sala [sic] Theatre was listed at 245 Central in the 1914-1915 American Motion Picture Directory, but the altered name was most likely just a typo.