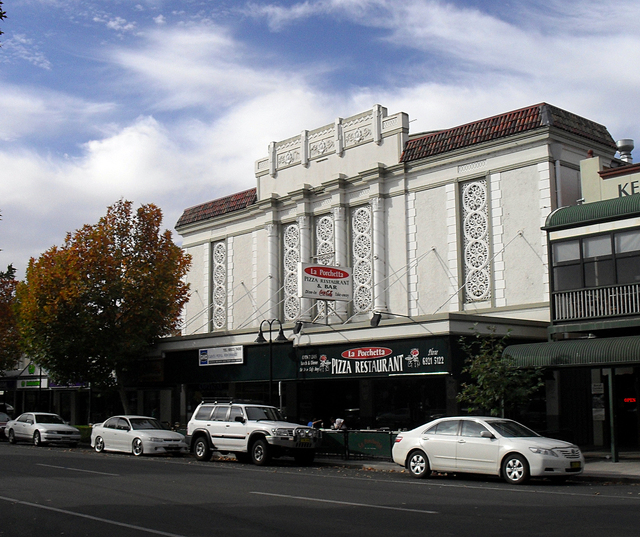 The Plaza Theatre was opened on15th September 1933, on the site of the Strand Theatre which was destroyed by a fire in 1932. The facade has a Mediterranean influence with the sloping tiled pediment and the high white walls broken by circular cinema friezes.

In 1946, Hoyts Theatres purchased the theatre, when the company acquired JK Capitol which also owned the Capitol Theatre in Gurwood Street along with a number of other theatres in New South Wales. In 1978 the theatre was sold to Hipada Pty. Ltd., owned by a local group of businessmen, after Hoyts pulled out of the regional theatre market and focus on its metropolitan theatres.

During the late-1970’s and early-1980’s the theatre was to be redeveloped however it was leased out with the building being closed in 1983, but the building was used as a ice skating rink, a book store and a temporary store for Best & Less which saw the removal of the orignal interior.

In February 1989 as part of a major redevelopment the Plaza Twin Cinema would be part of the project however it was put into doubt in March 1989 after the requirement to install a sprinkler system, part of the fire regulations, was going to cost a minimum AU$100,000.

In July 1989 the developers changed the design to being the costs to a manageable level. The Plaza Twin Cinema was opened in early-1990 and operated until 1997 when the Forum 6 cinemas was constructed in Trail Street.

Late-1990’s the building was redeveloped into small shops and offices with further refurbishment after its sale to local syndicate of investors.