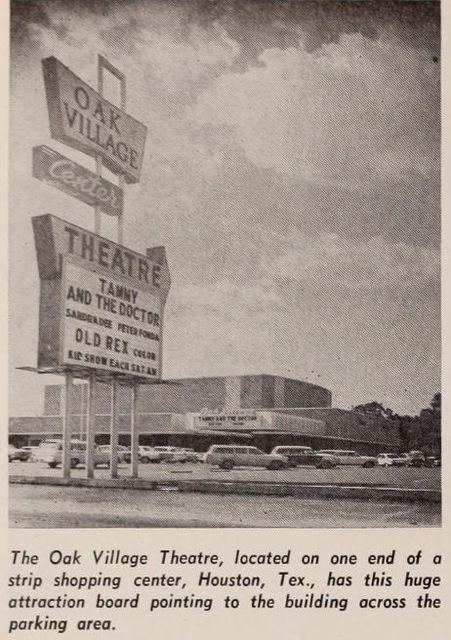 The Oak Village was originally planned as a twin, but the second auditorium never opened. The Oak Village Theatre opened on June 26, 1963 with Walt Disney’s “Flight of the White Stallion”. On June 25, 1976 it was renamed Long Point Cinema. In the 1990’s it was divided into 5 small screens.

It looks like it was a gym when this photo was taken:
http://tinyurl.com/ylnuzec

The opening film was disneys miracle of the white stallions with robert taylor. The date was june 23, 1963. My grandfather robert burge sr designed the furniture that was in the front ticket booth. I remember when I was 11 I saw in the summer of 1967 doctor dolittle with rex harrison. The theatre had a big single screen and lots of seats. In the 1970s the radio station klol in houston texas presented midnight shows like a hard days night, 2001 a space oddessy, easy rider. the theatre was packed for the films and during the beatles film the theatre turned the volume up and the patrons when wild. it was like you where in the same room with the beatles it was great. During the summer of 1973 they showed all 5 planet of the apes films all day long. the marquee called it a ape marathon . It was great alot of kids where there. Back in the 1990s they split the one large screen to five little screens making it a dollar cinema that was the begining of the end of the theatre. I wish they had not split that huge screen. they did it for economics.

Loved going to this theater. Saw “Mary Poppins” and the all-day 5-film “Planet of the Apes” marathon here, among many, many others. And I loved that I could get a big pickle at the concession stand.

The Boxoffice article Tinseltoes linked to says that the Oak Village Theatre was designed by architects Richard B. Walton and Woodrow Bush.

The picture above was taken during the 4th week that the Oak Village was open…July 17-23, 1963. The theater opened on June 26, 1963 with Walt Disney’s “The Miracle of the White Stallions”.

A couple of photos of the auditorium of the Oak Village Theatre can be seen on this page of Boxoffice, October 21, 1963 (click + sign in toobar at bottom to embiggen, scroll up two pages to read the beginning of the article.

Wasn’t this theatre’s auditorium divided up into from smaller screens prior to it’s closure?

Right, in regards to Jack’s question. I think its name was also changed to Long Point Cinema then but I could be wrong (could’ve sworn it was called that; anyone remember?). It had five screens once it closed down.