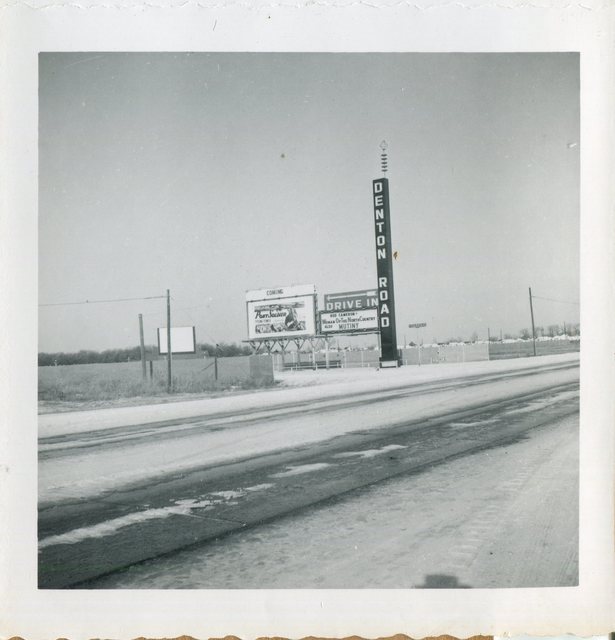 The Denton Road Drive-In was opened on June 23, 1950. It was located on Harry Hines Boulevard at Royal Lane and was part of the Leon Circuit into the late-1950’s. Capacity was 850 cars.

Name of this drive-in was Denton Road, not just Denton. Owned by same outfit that owned the Garland Road (which was later razed to make room for McLendon’s Apollo Twin) and the Hampton Road Drive-Ins.

This was never known as the Denton Drive-In; from its opening in 1950 to its closing, it was ALWAYS the Denton Road Drive-In.

The 840-car Denton Road Drive-In kicked off on June 23, 1950 with searchlights and featuring its opening film of “Montana” with Errol Flynn.This was the last of three drive-ins to be opened by the Leon Theatres that season preceded by the Garland Road Drive-In on April 7th and Hampton Road Drive-In on May 12th. It featured a picnic patio directly in front of the screen for people who wanted to watch outside their car. The theater was managed at the outset by Cecil Winston Starks but in August, Mr. and Mrs. Herold Goodman managed the drive-in for Leon Theaters. They would stay there 17 years until Mr. Goodman moved on to the Carrollton Chamber of Commerce in 1967.

At the end of the 1958 drive-in season, Leon subleased the Hampton and Denton Road locations to Claude C. Ezell’s newly-reformed Ezell Theater Circuit / Bordertown Theaters Inc. Ezell with his partner had opened Dallas’ first drive-in in 1941. But Ezell sold his portfolio in 1955 to Bordertown circuit. The Ezell/Bordertown acquisition gave Ezell 38 Texas drive-ins. That represented the largest drive-in chain in the state. The clout brought with it a new policy allowing the drive-ins to get films just 31 days after their initial plays in traditional theaters instead of the six-month window. But in 1964, Ezell dropped the Denton Road from the circuit. The theater was now in the hands of the Stanley Warner Circuit.

The theater’s history reads like a police blotter of unfortunate incidents and robberies including one in which the two features were stolen on May 4, 1966 with thieves making off with “Breakfast at Tiffany’s” and “The Silencers.” The Denton Road Drive-In became part of the Texas Southwest Drive-In Theatres circuit with the Buckner and Chalk Hill in 1972 but is taken on by McLendon Theaters in May of 1973. The theater becomes an discount drive-in with $1.99 carload and some 99 cent carload nights as McLendon tries to get what it can out of the fading location. When Showtime Inc. Theaters and McLendon circuits melded, the Denton Rd. Drive-In was dropped in February of 1974. It re-opened in early May after a short closure as an independent and appears to have closed for good in December 15, 1974 with a final feature of “Dead of Night.” If so, that’s an appropriate title to exit with for the almost 25-year old o-zoner. It was demolished and replaced by a gas station in the 1978 which, itself, was demolished and replaced by a strip shopping center.