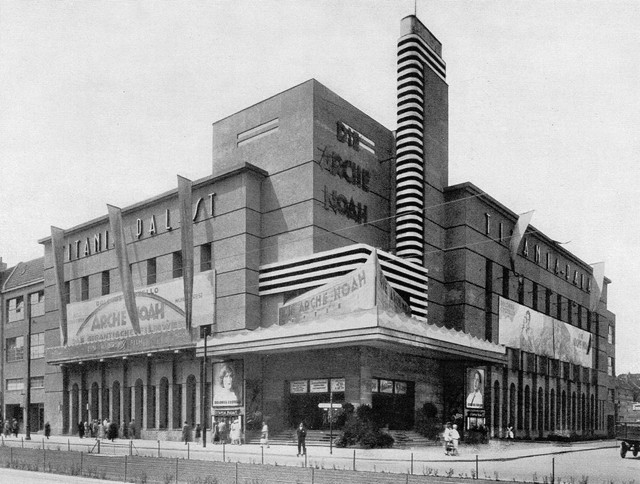 The Titania-Palast opened on 28th January 1928 for vaudeville shows and movies. The opening film was “Der Sprung ins Gluck” (Jump into Happiness) starring Carmen Boni (who appeared ‘in person’) and a revue on the stage “Wien und die Wienerin” (Vienna and the Viennese). The symphony orchestra had 80 musicians and the Steinmeyer concert organ was opened by organist Hans Joachim Ulm. Seating was provided for 1,924, with 1,418 in the orchestra and 506 in the balcony. Famous for its Avant-Garde Deco style architecture, inside and outside. It’s 30m ‘light tower’ became a widely known landmark. The Titania-Palast also had a 350-seat café for the convenience of its patrons.

The first sound film was Al Jolson in “The Singing Fool” which opened on 29th October 1929. The cinema survived World War II without much damage. On 19th September 1950 the Revue 1950 was staged, starring Josephine Baker. In 1953 it became one of the first CinemaScope cinemas. In 1960 the proscenium opening was ‘modernised’ and the adjacent side-walls were draped and a new ceiling was installed in the auditorium. On the 3rd & 4th May 1960 Marlene Dietrich appeared ‘in concert’. It continued to show movies and music shows until closing as a single screen cinema on 10th December 1965. A production of the opera “Die Fledermaus” was performed from 25th December 1965 until 9th January 1966.

The foyer and rear orchestra seating area was converted into a supermarket, the remainder of the building lay empty and unused.

The building was gutted internally, loosing the magnificent interior and it was reopened in 1995 as the Cineplex Titania 5-screen multiplex, using only a small part of the original building, besides several shops.

Here a link to a short history of this outstanding theatre and to ancient photos of the stunning exterior and interior. http://www.gruenewald.gmxhome.de/

Opened on 28th January 1928 to the designs of architects Ernst Schoffler, Carlo Schloenbach and Carl Jacobi, it had a seating capacity of 1,920 in orchestra and balcony levels. It had an organ, full stage facilities and a cafe. The sweeping curves of the proscenium arch were said to be the inspiration of the Gaumont Palace Theatre, at Wood Green in north London, UK which was built in 1934.

The Titania Palast was one of the great Berlin cinemas and the stage was put to good use, particulary after the war when it was the only large theatre in the city to remain un-damaged. Artists such as Yehudi Menuhin, Maria Callas, Josephine Baker, Zarah Leander, Maurice Chevalier, Louis Armstrong and Marlene Dietrich gave concerts. Weeks of variety, opera and ballet were also popular.

With the introduction of Cinemascope in 1953, the ceiling was lowered and the proscenium arch disappeared behind boarding and curtains. The last film was shown on 13th December 1965, then until the 9th January 1966 the opera “Die Fledermaus” was staged and the curtain fell for the last time.

A year later the building was up fo sale and BEWAG supermarkets moved in. The interior was ripped out and a floor built across from the front of the balcony. The ground floor was converted into shops, whilst from 1972 to 1994 the former balcony was used as a small theatre.

On 24th May 1995 the Titania Palast began screening films again. Five new screens had been formed in the upper parts of the auditorium and on the stage area. The entrance is now in the former stage house at the rear of the building (the original entrance is still in retail use, as is the former orchestra level). Current seating in the 5 screens is;1-396, 2-109, 3-210, 4-85, 5-103, making a total capacity of 903.

More infos and photographs on this theater (and many others) can be found on the German language only Berlin Movie Theater Guide – www.kinokompendium.de: Titania Palast

Thanks to Roloff for his photos this month, exterior & interior:
View link