Operated by: Frame ONE Theatres 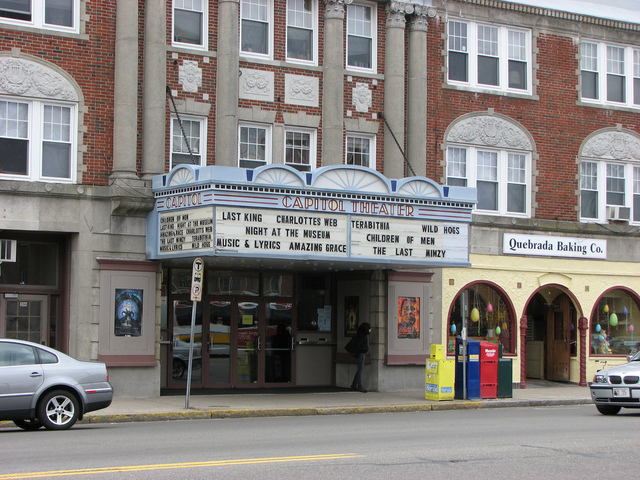 The Capitol Theatre opened November 25, 1925, as a neighborhood movie house with 1,600 seats and a stage with dressing rooms for vaudeville. The vertical sign on the front of the building is now gone, but the main marquee remains from its heyday. By the early-1940’s it was operated by Paramount Picture Inc. through their subsidiary Mullins & Pinanski. In 1986 the grand lobby was restored. The lobby’s granite columns and gold leaf - hidden since the 1960’s behind faux wood paneling - are once again on view. The lobby is a popular place for children’s birthday places. Interesting murals decorate the mezzanine lobby. The Capitol Theatre was placed on the National Register in 1985.

In 1989, the Capitol Theatre was multiplexed into five screens, but each auditorium was decorated in the style of the original theater! Auditorium 1 has the original proscenium arch with its large movie screen, beautiful multi-colored plaster designs, organ grilles, surround sound and 315 seats. The organ was removed in the 1960’s.

As of 2007, auditorium 2 has 159 seats and auditoium 3 has 150 seats. Two auditoriums in the former balcony have stadium seating:auditorium 4 with 197 seats and auditorium 5 with 203 seats. Auditorium 6, with 97 seats was added on the site of the old stage in 1990 and is reported to be haunted! Many historic and current photographs, including of the auditoriums, can be viewed on the theatre’s website.

The current theatre operators pride themselves in offering affordable prices for tickets and concessions, lower than the prices in the multiplexes. In 2007, Capitol Theatre ticket prices ranged from $5 to $7. Baby friendly movies are shown (details on the website). ‘Family Friendly’ mainstream first run and arthouse movies are shown. This wonderful gem of a theatre remains a fun place to go in Arlington’s downtown.

I am pleased to have a low price but quality theater in my town. The “original proscenium” screen is very good, the other screens are all OK, but the sixth screen in the “stagehouse” is mediocre: it’s long and narrow, and the screen is quite high off the floor. Very reminiscent of the “stagehouse” screens at the Harvard Square, Church St theater in Cambridge.

2007 photo of beautiful drinking fountain in the theater-
http://www.flickr.com/photos/goodharbor/288726979/

I worked for the Fraimans also, Doug, his son was a super nice guy… to show you the greed his father had, he pushed his own son out of the way so he could “develop” the property…and boy was his wife a b*tch

oh, to everyone else, I forgot to mention that I use to work here for the vianos too from 1980

We’ve installed Digital 3-D in auditoriums #1 and #4 at the Capitol; 35mm film remains alongside the digital in the main house (#1) but #4 is now 100% digital. While we are very pro-35mm film, installing this equipment was a way to ensure the Capitol gets first run movies in these formats. “Avatar” opened this week in the new Real D process and the presentation was top notch. The second-run market has dried up & this installation will help keep the Capitol open.

The Theatre Historical Society archive in Illinois has the MGM Theatre Report for the Capitol. Listed at 204 Mass. Avenue. It was in “Good” condition; had been showing MGM product for over 10 years, and had 1107 orchestra seats and 520 balcony seats; total: 1,627. There is an exterior photo taken in April 1941.

I grew up halfway between the Capitol and the Regent in Arlington. I was about seven (b. 1943) when I went to the Capitol with my buddies Stevie and Paul to see “King Kong”. When Kong first appeared out of the jungle with Fay Wray squirming in her nighty, I told my friends I was going to get popcorn, but I went and got my dime back and went home.

Along with the Somerville Theatre, the Lexington Venue, the Coolidge Corner in Brookline, and the IMAX screens at the Aquarium and Jordan’s Furniture, this is one of the very few theatres that continue to advertise in the Boston Globe Movie Directory.