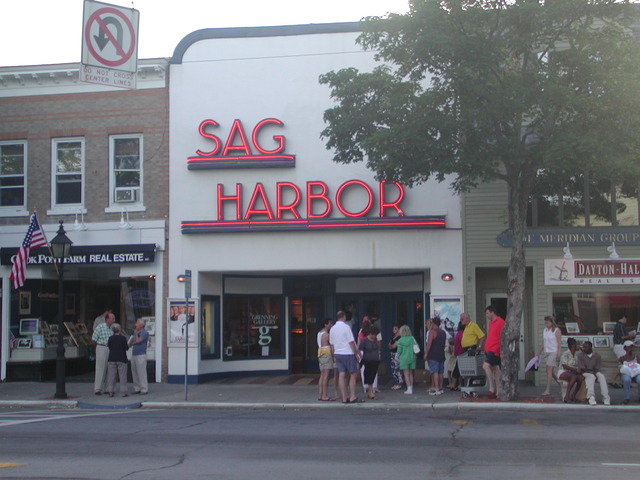 Built on the site of the George’s Theatre. The Elite Theatre opened on November 1, 1919 with Douglas Fairbanks in “His Majesty, The American” plus two Fatty Arbuckle comedies. Seating was provided for 700 in the orchestra and 300 in the balcony. The Elite Theatre was equipped with a Wurlitzer theatre pipe organ.

The theatre was renamed Glynne’s Sag Harbor Theatre when it was acquired by the Mike Glynne’s chain in September 1927, for an amount rumored to be between $35,000 and $40,000. On October 13, 1929 it screened its first ‘talkie’ “Kitty” starring Estelle Brody. The movie was a British made part-talkie.

This small town movie house was remodeled in 1936 by Prudential Long Island Theatres Inc. and a new 516-seat auditorium and façade was designed by noted theatre architect John Eberson. It reopened June 3, 1936 with Shirley Temple in “Captain January”. It became best known architecturally for its vintage auditorium, white façade, and neon lettering.

In July 1968 Prudential were taken over by United Artists and it was renamed Sag Harbor Cinema. It is located in the central shopping district of this popular resort town near the Hamptons. Still a delightful single screen art house cinema, its chocolate covered popcorn is also not to be missed!

On 16th December 2016 the front of the Sag Harbor Cinema was destroyed by a fire which spread from a nearby café. The auditorium was spared. In June 2018 plans were passed to rebuild and restore the theatre, which reopened as the Sag Harbor Cinema Arts Center on April 9, 2021 with “French Exit” & “Nomadland”. The iconic façade has been replicated. The original 480-seat auditorium space now has two cinemas: theatre 1 with 227-seats and the largest screen. Theatre 2 with 98-seats and a screen the same size as the original auditorium’s (pre-fire) screen. A 40-seat screening room is on the second floor.

Please update, the is going to be 3 screens when it reopens. Total seats 366 It should be listed OPEN and the website is sagharborcinema.org

I remember seeing one movie here, The Music Man. My family would go on vacation for two weeks in the Noyak section of Southampton where we had a summer home. It was raining one day, so my parents took us to the movies here.

As the Elite participated in a September 1920 ad in Paramount Week for a special exhibiting event.

There are now three auditoriums. Theatre 1 233 seats 4K projection, 10 x 10 Dolby Atmos; Theatre 2 90 seats 4k, 16mm, 35 mm projections, Dolby Sound; Theatre 3 (on the new third floor) a 38 seat screening room available for rental and use by student exhibitors. Actual physical tours can be booked at this time but the venue is not open for regular usage during Covid restrictions.

Uploaded an image of the Elite from the Sag Harbor Historical Society which appeared in “A Century of Celluloid in Sag Harbor” in the February 16, 2016 Sag Harbor Express. Article can easily be Googled online.

Announced today that the theatre will officially reopen April 9th. No details of the how.

Although the facade had to be replicated the signage was salvaged and repaired. This signage is a replication of the original fabricated less than ten years ago at a cost of $22,000.