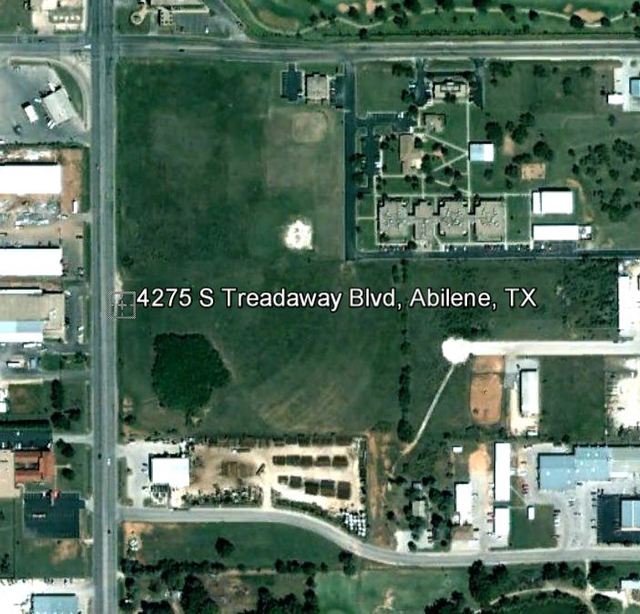 The Crescent Drive-in parked 400 cars and in the late fifties it was owned by O.M. Kirkeby.

Can anyone come up with an address or a crossroad so we can pinpoint the site of this drive-in?

This address will map to the exact location of the drive-in. S. Treadwell Blvd was formerly Hwy 83, before the bypass was built.

Here is an aerial photo from 1954, courtesy of Earth Explorer and USGS:

I remember it was painted black and orange. The Crescent tool and supply company is located beside where it was.

The operators of the Tower Drive-In, O.M. Kirkeby and R.A. Erickson, decided to build a second drive-in in Abilene in 1951. The proposed name of their $100,000 ozoner was the Cedar Gap Drive-In. But by grand opening on February 5, 1952 the 350-car facility’s name was named after its neighborhood of Crescent Heights as the Crescent Drive-In launching with “Thunderhead: Son of Flicka.” With the Crescent opening, the operators closed the Tower briefly for some repairs.

New operator Katherine Jacobs and Duane Gates ran into some issues with the theater. Improvements made in 1960 were under scrutiny from the land owner. Further scrutiny came when the Crescent started showing adult films and in December of 1961 had its film, “Not Tonight, Henry” impounded by local police. That led to a censorship hearing in January 1962 that went to trial in March with the charges dropped with the film finally returned — albeit very late — to the Dallas Art Film Exchange. After returning to more family-friendly fare, the theater returned to adult films in 1968 rebranding the the theater as Crescent Arts Theater. On November 3, 1968, the Tower and Crescent were sold to Video Independent Theatres Circuit (VIT) which already owned the Key City Drive-In and a month later would also acquire the Town & Country.

In 1969, VIT switched the Crescent Arts back to the Crescent Drive-In Theater showing Spanish language films. It operated the Crescent until just after its 25th Anniversary closing on May 29, 1977. Likely a lease expiration, the Crescent closed as a Spanish-language drive-in with una doble función of “El misterio de la perla negra” and “Mil millones para una rubia.” The theater would quickly be demolido.

I recently went out to where the Crescent was located. Digging around I found some orange speaker poles buried up.