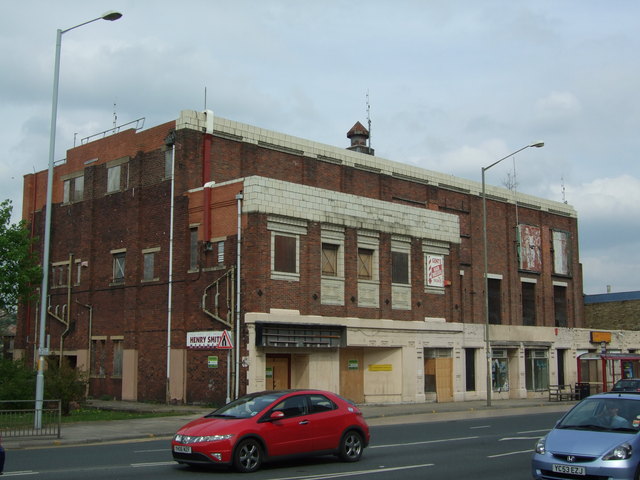 Located in Shipley, Yorkshire. The Glenroyal Cinema was designed in an Art Deco style by Manchester based architect Ernest H. Dawson. It opened on 5th September 1932 at 2;30pm with the film “Emma” starring Marie Dressler, and a live jazz band on the small stage.

It seated 1,200, including 350 in the balcony. An unusual feature of the Glenroyal Cinema was five large windows with internal geared shutters, which could flood the auditorium with natural light.

There was a 2Manual Hammond organ on a rising lift which was regularly played until the cinema closed, when it was removed to a Working Mens Club nearby. CinemaScope was installed in 1955, and the capacity of the hall was reduced slightly.

The Glenroyal Cinema closed on 8th December 1962 with Shirley MacLaine in "The Loudest Whisper". It was immediately converted into a bingo club operated by the Star Cinemas chain, which later became owned by EMI. Walkers reopened the Glenroyal Cinema in 1990 again for bingo, by this time a false ceiling had been installed at balcony level, only the ground floor of the building was used. Finally it was operated as an independent Kings Bingo Club.

This too closed around 2008, and the building left derelict until it was destroyed by a fire in the early hours of 18th January 2013.

Some exterior photos of the Glenroyal, taken in April 2010 can be found here:–

This webpage has several pictures of the theatre after it closed as bingo hall.

There are additional historical details and pictures on this webpage.

The Glenroyal was destroyed by fire in the early hours today (18 January 2012). The remains are deemed unsafe and are due to be demolished later in the day – Briggate being closed for the duration.