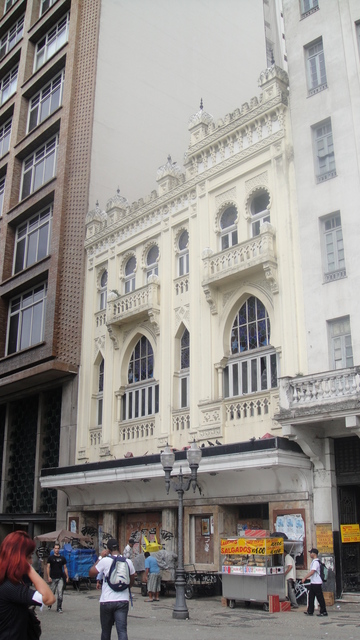 Located in the central Cinelandia district of Rio de Janeiro. The Palacio Teatro opened in 1890, designed by architect Adolfo Morales. It has a beautiful Moorish style façade, and this style of decoration possibly extended inside the building originally. In 1929 it was reconstructed to the plans of architect Mathias Ferreira and the auditorium was given an Art Deco style. Seating was provided in orchestra and two balcony levels. It re-opened on 29th June 1929 with Charles King in “Melodia da Broadway” (Broadway Melody of 1929).

The Cine Palacio was the first cinema in Rio de Janeiro to be equipped with CinemaScope, when “The Robe” was presented. In later years it was twinned, and the façade was covered with metal sheeting. It was closed in the mid-2000’s.

In 2011, the building stands empty and unused, and is protected by the Mayor of the city, which stops any development, demolition or alterations. Since closing the façade has been renovated and an earlier marquee and signage dating from the twinning have been removed.

It was restored and reopened in August 2016 as a live theatre named Teatro Riachuelo Rio.

Historic and recent photographs of the Cine Palacio here:
View link
Photographed at night in May 2007, just prior to closing:
View link
A street view in May 2007:
http://www.flickr.com/photos/rbalocco/528154860/
Photographed closed in October 2009:
View link

A vintage photograph of the Cine Palacio in 1981, showing the facade covered over, in an attempt to give a modern look to the building:
http://www.flickr.com/photos/frenetico/3555831936/

Re-opened in 2016 as a live theatre, “Teatro Riachuelo Rio”.