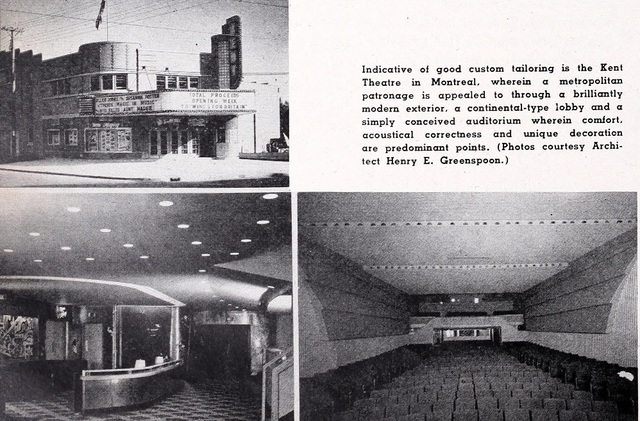 The Kent Theatre was opened by Odeon on June 20, 1941 with Allan Jones in “There’s Magic in Music” & Wendy Barrie in “Who Killed Aunt Maggie”. It was later sold in the late-1940’s to United Amusements (Famous Players). It was twinned in 1980 and closed in 1987 when the landlord refused to renew the lease.

The Kent Theatre was designed by architect Henry E. Greenspoon. The Kent and another of Greenspoon’s pre-war designs, the Villeray Theatre on Rue St. Denis, were pictured in an article by Helen Kent in Boxoffice, March 3, 1945.

Here is a better link to that March 3, 1945 BOXOFFICE ARTICLE by Helen Kent, with photos of the Kent Theatre.

The 1953 British film The Kidnappers, also called The Little Kidnappers (in the U.S.)ran for 20 weeks here in 1954. That must have been some sort of record at a time when movies rarely played more than one to three weeks. The film featured Duncan Macrae, Jon Whiteley, Vincent Winter.

I uploaded a couple of grand opening ads here.

I remember seeing ‘running scared’ here by myself as a kid walking from trenholme avenue. the good ole days.