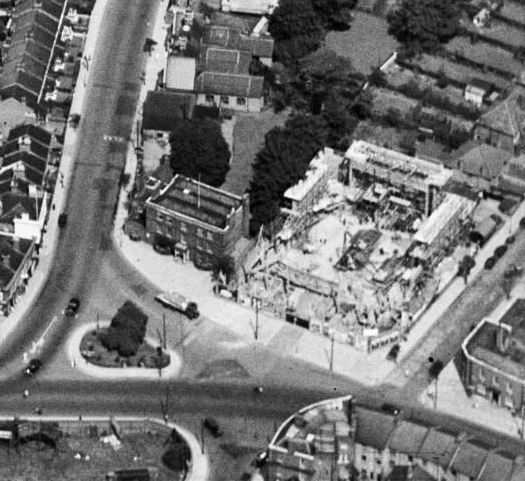 Located in western Thames-side district of Teddington, Greater London. The New Savoy Super Cinema was built on the site of two cinemas, an earlier Savoy Cinema/former Picture House and the Elmfield Picture Hall, which were located at the corner of Teddington High Street and Elmfield Avenue.

Built for and operated by Associated British Cinemas(ABC) it was opened on 29th November 1937. Designed by ABC’s in-house architect W.R. Glen, it had a white stone facade in the centre, with red brick on each side. Inside the auditorium, there was a proscenium 45 feet wide, and a 13 feet deep stage, with two dressing rooms.

It was demolished and an office block built for the Automobile Association was built on the site, now named Harlequin House.

I only went there once and it was to see “The Navy Lark” a black and white CinemaScope film. Nice auditorium and sound and picture was fine. John