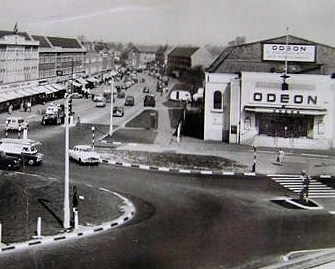 Located in the southern Greater London district of Tolworth, south of Surbiton. At the time of building, the area was basically green fields, with a proposed housing estate pending.

The Odeon was one of the original Oscar Deutsch chain of Odeon Theatre’s and opened on 9th June 1934 with Eddie Cantor in "The Kid From Spain". Seating was provided in a semi-stadium plan, with a raised tiered section in the rear, rather than an overhanging balcony. There were 439 seats in the stalls and 452 in the raised section.

The Odeon was an early closure for the Rank Organisation, and it closed on 10th October 1959 with Peter Sellers in "I’m All Right Jack".

It was demolished in 1961, and the 22 storey Tolworth Tower designed by architect Richard Seifert was built in 1964, that contains a Marks & Spencer store on the ground floor.

A couple of pics here.