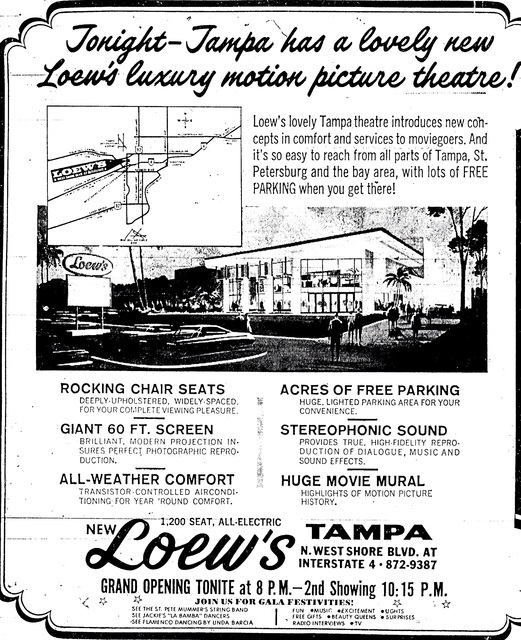 The spacious lobby boasted the famed Loew’s Theatre trademark, a huge mural above the refreshment center displaying drawn portraits of several of filmdom’s most famous faces. The walls in the auditorium featured ceiling-to-floor drapery in alternating patterns of pink, orange, and beige illuminated by recessed ceiling lighting. Seats were pushback and rows were staggered permitting a better view of the entire screen from any seat. Loew’s had a 60-foot wide screen and was equipped for 70mm projection and stereophonic sound.

The grand opening was a major city event featuring searchlights in the skies, a string quartet in the lobby, and flowers for the ladies. Several Loew’s dignitaries were on hand as well as the mayor of Tampa. The mayor gave his blessing saying he hoped the citizens of Tampa will spend many happy hours in this beautiful building. The audience was then asked to bow their heads in prayer.

The theatre opened with the R-rated film “Candy”, which raised more than a few eyebrows. The film’s star, Ewa Aulin, was supposedly scheduled to appear in person for the premier showing but was not able to attend. A recorded message from her was played on the theatre’s sound system prior to the showing. She apologized for her absence and said she was proud that “Candy” had been choosen to open the new Loew’s luxury theatre.

Prior to the showing the mayor made a reference to the R-rated film stating, "don’t worry the vice squad knows I’m here!" This comment drew several chuckles from the audience and the showing began. “Candy” can best be described as a hard-to-follow almost unintelligible soft-porn fantasy loaded with sexual innuendo and as I recall some very brief nudity.

One disgruntled lady later fired-off a letter to the Tribune saying she had attended the opening of the Loew’s and saw a beautiful building inside and out, and the opening ceremony was also beautiful. But all this soon went downhill with the showing of the film which she referred to as a "hog wallow" saying the mayor should have immediately shut the theatre down on this filth. I’m not one for censorship but I tend to agree. Theatre management made a poor decision to have choosen such a controversial R-rated film to open their new theatre (and a very poor one at that.) Even so the film played for several weeks.

The Times film critic said “Candy” drew a horde of young persons and a few open-minded older persons. The Tribune critic wrote that it was difficult to choose the proper adjective to describe the film although lousy, insulting, and dull could all apply.

“Candy” was followed by several big attractions, “Yellow Submarine”, “Goodbye Columbus”, “Swiss Family Robinson”, “The Prime of Miss Jean Brodie”, “Medium Cool”, “Whatever Happened To Aunt Alice?”, “Easy Rider”, “The Other”. Loew’s was also home to two giant hits of the early-1970’s, “Love Story” and “The Godfather”. Each of these monster hits played for months and months on end.

The only film adertised as 70mm that played here was “MacKenna’s Gold”. However, the Intenet Movie Database indicates the film as being in "Super Panavision 70" (segments) and "release prints in 35mm." So apparently the film wasn’t a true 70mm print. There may have been 70mm presentations at the Loew’s but if so the ads were certainly low key as I kept a close watch but never saw any.

Loew’s received a feature story in the Tribune one day when an elderly couple from Sun City Center arrived at the theatre on a weekday afternoon. It was the husband’s 80th birthday and his wife wanted to treat him to “Love Story” at the matinee showing. When they arrived at the theatre they found the doors were locked. The wife began banging on the glass doors alerting the manager who opened the door only to tell them that the matinee showing for that day had been canceled.

The wife explained that they had driven all the way from Sun City Center as she wanted to treat her husband to “Love Story” for his 80th birthday. The manager invited them in and made a quick call to the off-duty projectionist and explained the situation asking if he would be willing to come down to the theatre and run “Love Story” for this couple. The projectionist agreed and so the couple entered the large empty theatre, and having their choice of 1,200 seats, sat and watched their own special showing of “Love Story” all by themselves. Afterwards the wife said they both enjoyed it but her box of tissues was depleted before the end of the film.

The manager should have been commended for this very kind gesture. It must have been great publicity for Loew’s. Surely this story made it to Loew’s head office and more than likely that manager probably made district manager.

A relief operator told me he was running “Harry and Tonto” one evening when someone was apparently shot inside the theatre auditorium. He wasn’t even aware of it until the following day when he saw the article in the papers. "Here I am up in the booth running this film and someone gets shot and I’m not even aware of it till the next day!" he said.

On July 18, 1972 General Cinema took over ownership of the theatre from Loew’s and it was renamed Austin Cinema. It was twinned November 16, 1973 thereby effectively destroying a beautiful theatre. It was renamed Austin Cinema I & II for local builder-developer Alfred Austin. The twinning was a travesty and a hack-job that completely ruined a beautiful theatre. The wall seperating the auditorium was painted dark blue and the opposite wall in each theatre remained as it was. Two smaller screens were installed probably about 25 to 30 feet wide. The rows of seats remained bolted to the floor and were not angled to properly face the new screens. Patrons seated near the dividing wall especially in the first few rows had to crane their necks at an angle towards the screen.

The new Austin Cinema I & II opened in November 1973 with “The Way We Were” and “Executive Action”. When “Grease” opened in 1978 it played for what seemed like an eternity. It was to be the last long-running hit for the Loew’s/Austin.

The final day of operation was September 11, 1979 and the last two features were “The Muppet Movie” and “Hot Stuff”. The building remained vacant for about 5 years and was finally demolished around 1985-86. The Marriott Hotel Westshore now occupies the site.

To whomever posted the great marquee photo—THANKS— very nice! I scanned the Tribune for days but could not find a single shot of the Loew’s building inside or out. This shot is from the evening of the grand opening on Friday, December 20, 1968. Nice memories of a great theatre before it was twinned and totally ruined.

Candy? What were they thinking? Well, at least it got them some attention. Too bad Candy was such a crummy movie. But then, how could it miss. Wonder what Ewa Aulin is doing these days.

I thought Ewa had faded into oblivion but following CANDY she appeared in several Italian films during the 1970s and one other American film, START THE REVOLUTION WITHOUT ME which did very little box office in the U.S. According to Wikipedia she was forever typecast as a “blond nymphet” by the industry and her dream of becoming a serious actress never materialized. She eventually gave up acting, went to University and became a teacher. Good career move!

I moved to Tampa in 1983 and the theater was already torn down.

What happened to the Loew’s marquee photo that was posted on this page?

Found the grand opening ad for the Loews from December 20th, 1968. It opened the same day as the Trans-Lux in Clearwater.

Rivest266: Thanx for posting the nice ad. Is this from the St. Petersburg Times? I have the opening day ad from the Tampa Tribune which is much too large to scan. It’s a huge 2-page spread advertising both Loew’s Theatre and the opening attraction “Candy.”

Architects of the theatre were Jacob L. Gottfried and Genaro Garcia, Jr. of Gottfried & Garcia Architects of Tampa. The broader complex encompassing the cinema in early stages appears to have been executed by architect Harry A. MacWen.