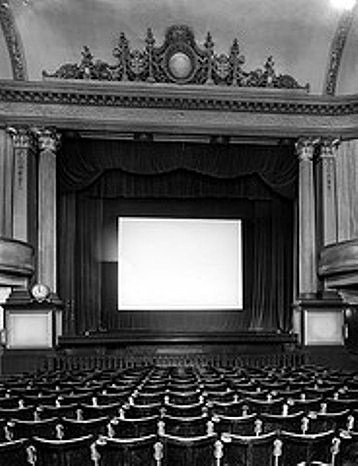 The Majestic Cinema first opened its doors on May 26, 1928 with Ramon Navaro in “Ben Hur”. It seated 1,149 in stalls and single balcony and had been designed by local Kings Lynn architects J.L. Carnell and W.D. White. An extremely elegant cinema with much polished mahogany and a delightful mosaic floor incorporating the Majestic name in the foyer. Other decorative features include many stained glass windows. Additional facilities at the Majestic Cinema were a ballroom and cafe.

It was built as an independent but was taken over by Union Cinemas in 1934 and then became part of ABC Theatres when Union was bought out by ABC. It was however never renamed as ABC’s main house in the town was the Theatre Royal.

Since 2001, the Majestic Cinema has been designated a Grade II Listed building, as much of the interior decoration survives. It narrowly avoided demolition in 2000.

A recent close-up of the entrance and a beautiful night view of the Majestic Cinema Centre can be seen here:
View link

More pictures of the Majestic here:–

I have loaded a pic of earlier Days. I did a 16 Day Relief (Management) in the 1970’s Saturday night The Ballroom was very loud. and had to work later.

Correction to above text – a wall was not dropped to the front of the balcony, a horizontal sub-divison at balcony level took place to create the two cinemas in the original auditorium.

My Grandfather, Ernest, Ralph, Adams, built and owned the Majestic cinema in King’s Lynn, working closely with the architects in it’s design. He bought the interior of the Empire Theatre, Leicester Square, London, before it was demolished. The wonderful mirrors and panelling from which were restored before being fitted into the Majestic. He later became a Director of both Union and ABC Cinemas.

What about the tower- the most prominent feature?. Has the space inside being used for any purpose?

Most of the Tower was an emergency staircase for the projection box and taking a flow from the Ballroom. The Clock was a slave type ran from the Managers Office

Further photos of the interior taken in July 2019 here:–