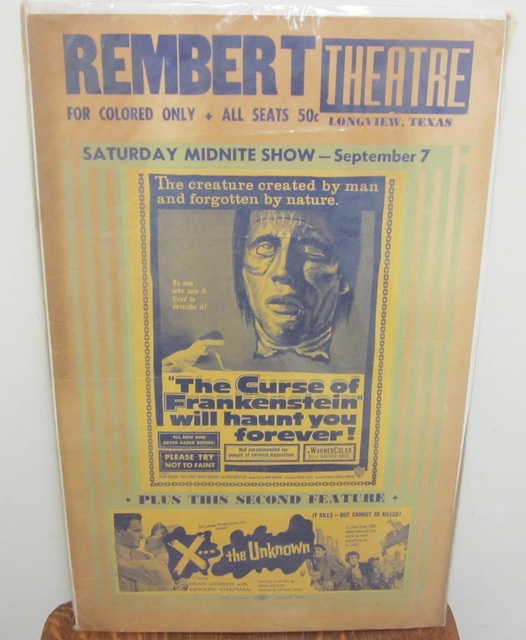 The Rembert Opera House was opened in 1883. It became the Rembert Theatre in 1916 with seating listed at 892. The theatre was operated by East Texas Theatres and later by Jefferson Amusement Co.

The theatre closed November 9, 1957 and has since been demolished. There is a parking lot where the theatre once stood.

204 E. Cotton St. is now the site of First Baptist Church of Longview at the SE corner of Cotton and Fredonia.

This was my theater while growing up in Greggton, Tx, just to the west of Longview. Double features on Saturday for only 10 cents and candy for 5 cents. Always had a comedy to watch and an ongoing serial. Spent many happy hours in this theater.

A generation of Longview’s residents knew the Rembert and its neighboring hotel as its primary entertainment hub. Mayfield, Rembert and Company drew up plans for this 400-seat facility in 1879 when Davis Hall was found to be substandard for live performances. Frank T. Rembert was one of the visionaries of the project which on the drawing board was the Longview Opera House. The facility was known as the Rembert Opera House upon opening in 1883. Rembert would add the Palace Hotel as a neighbor to the theatre in 1909 which housed road show companies and provided theatre goers with a coffee shop for before and after shows.

The Opera House began to mix film into its repertoire at the turn of the century and was renamed the Rembert Theatre in 1916. It converted to sound on May 1, 1929 after a two week celebration with the equipment on display the last two weeks of April. The Rembert Theatre survived into the TV era closing for films on November 9, 1957 with a double feature of “The King and Four Queens” and “Bop Girl Goes Calypso.”

Sporadic events took the venue past its 75th anniversary and were held at the facility until 1960. A salvage sale listed in 1961 preceding its demolition. The Palace Hotel would last another ten years when it was demolished in 1972.