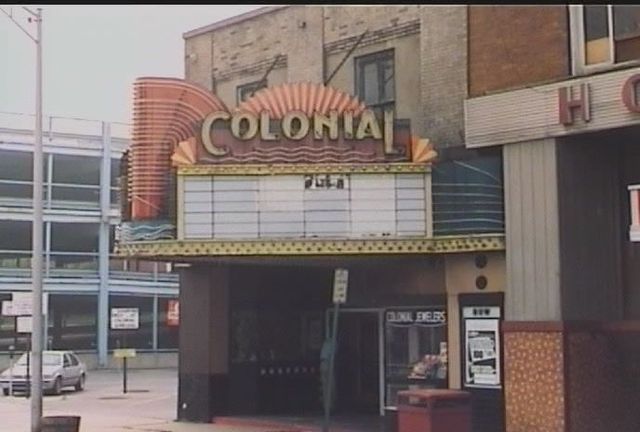 The Colonial Theater was a very old theater which first opened March 15, 1916. It was designed by architect E.L. Shufflebarger. It was remodeled in 1939 in the Art Deco style by Alcox & Stritzel of the architectural firm F & Y Building Service, reopening on June 30, 1940. It served as both a full theater and a movie house until closing in 1979.

Unfortunately, it suffered damage on February 27, 2009, when sections of the adjacent Matz-Milner Hotel collapsed onto the theater’s facade and lobby, taking down its marquee.

This story was posted by the Charleston Gazette:
http://tinyurl.com/cjp2au

some of the undated photos, it looked so grand back in its day. this theatre will never be Forgotton.

I wrote an article about the Colonial -describing the theatre when Steve let me peek inside a few years ago. I found out days before the collapse about some of the performers who took to the stage in vaudeville acts – Bob Hope, Fred & Adele Astaire, Mae West, Helen Kane the boop-boop a doop girl (the original Betty Boop), Sally Rand with her feather dance, Gypsy Rose Lee with her famous burlesque act and Steve told me that Roy Rogers and Trigger came to the Colonial too! www.themartinhouseproject.blogspot.com

Something really important was left out of all the newspaper articles – Mr. Tibbs hasn’t given up on the Colonial’s auditorium. We’re all holding our breath, waiting to see if the demolition of the Matz will damage the Colonial further. I hope to help him – I’m part of a team restoring a historic home in Bluefield, it’s the most difficult place you could try such a thing. There are so few people there who know how to fix modern buildings – and nobody there or in the surrounding area who specializes in restoration. So everyone trying to restore anything in or around Bluefield,WV has to get really creative.

Does anyone know if the city of Bluefield or Mr. Tibbs will be selling items in the Old Colonial’s auditorium. I would be especially interested in some of the seats. Thank you!

Here is another recent article about the Colonial:
http://tinyurl.com/dbo679

Was there a theater built at Bluefield in 1917 or 1918? The March 6, 1917, issue of The Ohio Architect Engineer and Builder has this item: “Architects C.C. and E.A. Weber… have completed preliminary plans for a theater and arcade…. The structure will be two stories and basement, 129x62 feet and will be erected in Bluefield, W. Va….”

A cursory search of Boxoffice turns up half a dozen theaters in Bluefield not yet listed on Cinema Treasures. The Weber brothers' project might have been any of them, or might have been the Colonial. I found one Boxoffice item about a fellow who began his theater career working at the Colonial in 1919, so it must have opened in the teens, not the twenties.

Chris and Edward Weber were well known architects in the region in the early 20th century, and designed Kentucky’s governor’s mansion, among other notable structures.

The local papers are implying that the Colonial is gone. It would help if this could be confirmed by someone in the area.

The August 4, 1917, issue of The Moving Picture World published an example of the Colonial Theatre’s monthly postcard calendar. Scan at Internet Archive.