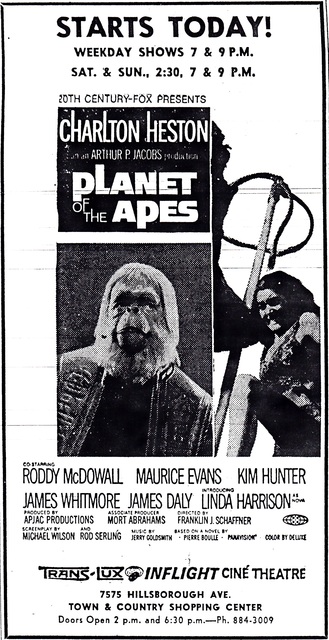 This small 350-seat 16mm theatre opened on August 14, 1968 as the Trans-Lux Inflight Cine Theatre. The opening attraction was "The Odd Couple" with Jack Lemmon and Walter Matthau. The following week "Planet of the Apes" opened sparking my first visit to this unique theatre.

The theater was located next to Zayre’s Department Store in the Town ‘N’ Country Shopping Center. This was the second Trans-Lux Inflight Cine Theatre in Florida following the first venue built in Bartow, FL in 1966. The small white building was constructed right against the side wall of Zayre’s and somewhat resembled a mini Loew’s theatre building but on a much smaller scale.

Research reveals Trans-Lux and Inflight were two separate companies: Trans-Lux Theatres and Inflight Projection Systems. The theatre was equipped with 16mm Norelco FP16 projectors with 1000 watt lamphouses. Projection and sound systems were designed by the chief engineer and VP of Inflight, Boyce Nemec. Inflight refers to the automated projection system - the same design as those installed on airlines. Towards the end of 1971 the theatre converted over to 35mm projection.

Although the theatre played single features it was always a second-run house. Films would open here following their first-run showing and occasionally before hitting the drive-in circuit. All seats were $1.50 and as I recall no tickets were dispensed. Admission was paid at a small window just inside the entrance. You then went through a turnstyle and entered the tiny lobby.

I remember patrons were standing nearly shoulder-to-shoulder in the small lobby with a long line outside awaiting entrance for "Planet of the Apes." which soon sold out. The auditorium was designed attractively in gold and blue (as I recall) and surprisingly there were even gold curtains over the screen. My best guess for screen width would be about 20 feet.

When the lights went down and the curtain opened over the 20th Century Fox logo I wondered what had happened to the picture. It looked as though a few feet were missing from the top and lower portions of the image. Since the film was in ‘scope it was shown in the letterbox format with a ratio of 2:1 resulting in a wide but very narrow image.

Never having seen a 16mm feature in a commercial theatre before this looked very different from 35mm ‘scope. Although after awhile my eyes became more accustomed and accepting of the image. I also saw "2001: A Space Odyssey" here in 16mm which was actually not bad at all. A very good presentation even though the image was smaller than standard theater size. The film even had the pre-show music prologue and the print was excellent.

All prints that played here were evidently new and were presented as professionally as possible with focus always in check. They were not beat-up, splicy, or scratchy as is so common with 16mm.

The first film I remember seeing following the conversion to 35mm was "American Graffti." They had increased the screen size slightly to fit the larger 35mm image. Not sure if a new screen had been installed or if the masking was changed on the original screen.

On July 1, 1975 "Young Frankenstein" ended its 3-week run and on July 2nd the theatre’s name was changed to Cine Theatre. A film called "Blue Summer" opened July 2nd and played through July 5th. Then on July 6th the theatre began running Spanish language films. From this date forward the ads appeared only sporadically making it impossible to know the exact date when the name was once again changed to the Puerto Rico Theater. But as best as I can determine this occured around the summer of 1976. And to complicate matters even further the theatre would alternate between the two names in the ads. Occasionally the ads listed Puerto Rico Theatre and at other times Town ‘N’ County Theatre.

The films also alternated between Spanish language and English language. English films were always subtitled in Spanish. But there was never any mention of subtitles in the ads. I was surprised when I saw "Live & Let Die" in English and the film had Spanish subtitles. I also remember seeing "Earthquake" and "The Towering Inferno" on a double bill and both were in English with Spanish subtitles. I recall hearing someone in the audience comment, "why would they do that?" when the subtitles first came on the screen.

Occasionally whenever English films would play the newspaper ads contained the slogan: FOR THE GOOD FILM LOVER printed above the titles. In scanning the ads for this period I saw these films advertised: "King Kong" "A Bridge Too Far" "New York New York" and "Viva Knievel."

The final day of operation as best as I can determine was November 3, 1977 with a Spanish film playing as the last feature. During this period the ads had been appearing pretty consistent just about every day up until November 3, 1977. Going forward for a week beyond this date did not show any additional ads.

I believe the building was demolished not very long after closing. My guess would be around 1978 or 1979. A new and slightly larger building housing Ace Hardware was built on the site.

You would think that a theatre chain would do something to solve that problem.You have to sell snacks.All three of ABC THEATRES here in Augusta had plenty of room at the concession.GCC was tight at both locations I worked in Athens and Augusta,but they were tucked into a MALL.

Nick, I think this theater is still standing. The property appraiser states that the complex was built in 1967 and shows no modifications to the main complex except for the construction of various outlots at the edge of the parking lot.

Andy, Sorry for my delay in responding as I just now saw your comment. This is very strange. The property appraiser has to be incorrect as I saw the theatre being demolished and an Ace Hardware store being built on the site. Do they refer to the property as 7575 W. Hillsborough Ave? This is the address of the Town ‘N Country Shopping Center where the theatre was located. I believe Ace Hardware is probably the only building within the main complex to be built when the theatre was demolished. Although the property appraiser is somewhat correct in saying the main complex itself hasn’t changed since 1967 (with the exception of various stores that have come and gone) you’d think the appraiser would be aware that a new and larger building selling hardware supplies has replaced a smaller building formerly housing a movie theatre!

Here’s a photo of the building and auditorium when theatre opened as the Trans-Lux Inflight Cine. Not bad for a 16mm setup. Sorry photos are so small but attempting to enlarge them blurred the image.
View link

WHY wouldn’t it open as a 35mm theatre like everything else.Good pictures Nick.

I’ve updated the street view although it’s still not the best angle. Unfortunately the site is a fair distance from the road, and trying to zero-in any closer or from another angle only blurred the image.

The theatre was located in the very center of photo. It was the last building at the left end of the plaza strip of stores all trimed in pink. It was demolished and replaced by an Ace Hardware Store.

I uploaded a photo of it here.

Rivest266: Great nice size photos of this rare theatre! I had posted a link above showing these same shots but they were much smaller. I couldn’t enlarge them without losing a good deal of the focus. Thanx for posting. Not a bad set-up for a 16mm theatre.

Wow, this is incredible I love this site. My father owned the Town n Country Theater back in the 70’s i remember as a child running up and down the halls and performing for the audience on the stage just because I could lol. Beautiful thank you for this site. And the building was demolished and became an Ace Hardware ;(

This opened on August 14th, 1968. Grand opening ad in the photo section.