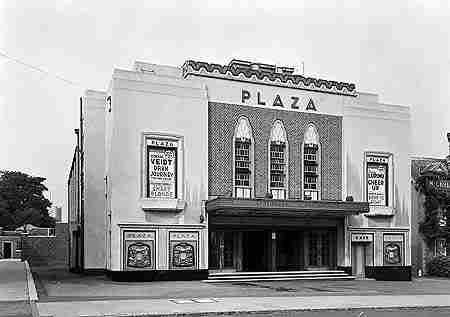 Located in West Wickham, a district to the east of Croydon in the south-east of Greater London. The Plaza Cinema was opened on 4th September 1933 with Constance Bennett in “Our Betters” and Wheeler & Wolsey in “Diplomaniacs”. Built for an independent operator, it was the 100th cinema to be designed by architect John Stanley Beard. The exterior facade of the building was covered in white tiles on its two outer bays, with a central section over the entrance having three windows surrounded by brick. The name ‘Plaza’ was set in the brickwork above the window, and there was a zig-zag, tile motif above the name. The cinema was built for cine-variety, and had a stage and three dressing rooms. Seating was provided for 616 in the stalls and 270 in the balcony.

It was taken over by Oscar Deutsch’s chain of Odeon Theatres Ltd. in 1937, but retained the Plaza name until 15th March 1938, when it was re-named Odeon. The Rank Organisation re-named the cinema Gaumont on 19th March 1951, and it was closed on 5th January 1957 with Dean Martin & Jerry Lewis in "Hollywood or Bust" and Tom Conway in "Breakaway".

It was demolished in June 1961, and Rosemallow House was built on the site, which includes a Finefare supermarket (today Sainsbury’s) and a branch of Boots.