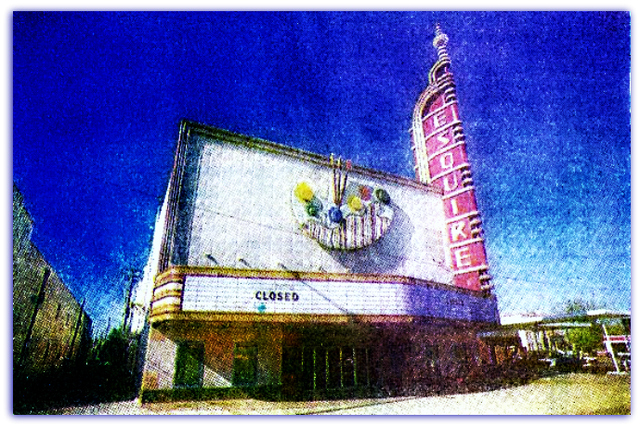 The Melrose Theatre opened on 15th May, 1931 and was designed by architect W. Scott Dunn in an Atmospheric style. Seating was listed at 550. By 1941, the seating capacity had been increased to 900 and the Melrose Theatre was operated by Paramount Pictures Inc. through their subsidiary Hoblitzelle & O'Donnell.

Taken over by Interstate Theatres Inc., the Melrose Theatre was entirely remodeled in 1947 and reopened as the Esquire Theatre in late-1947.

Adding to my above post, I have recently found out that whole Oak Lawn/Lemmon Ave. area (which I only heard referred to as the Lemmon/Oak Lawn area when I was growing up in Dallas from ‘58 – '79) used to be called the Melrose district – think that was the name of the area’s old telephone exchange, IIRC. The historic and refurbished Melrose Hotel is just down Oak Lawn from the old Esquire/Melrose location.

Joe Vogel – in perusing the online listings of documents comprising the Interstate Theatres Collection housed at the Dallas Public Library, I came across further evidence that the Esquire and the Melrose were one and the same: Box 92, documents 1-5 refer to “CPA Applications” and “Renovations” at the “Melrose/Esquire” in 1945, 1946, and from Jan-Feb through to July-November 1947.

Obviously the theatre was not closed for two years, but must have been periodically shuttered as Interstate’s complete remodeling plan was carried out step-by-step. When re-opened as the Esquire, the venue bore no resemblance to the former Melrose.

I’m sure most Dallas theater enthusiasts know this, but the neon artist’s palette that used to be above the Esquire’s marquee now hangs on the outside wall at a building in Las Colinas near Irving, just outside Dallas. Here’s a link to a picture of it on flickr.

The 1952 Boxoffice Magazine page with the photo of the Esquire’s sign has been moved to this link. Here’s a shortcut to the rendering of the Melrose matt54 linked to.

The Esquire’s vertical sign is obviously not, as I had suspected it might be, a reworking of the Melrose sign. It’s much bigger, and is even in a different location on the facade than the Melrose sign was. Now that I’ve seen the Melrose as it was before the remodeling, with all its Art Deco detailing, I have to say I preferred it to the Esquire.

Uploaded the grand opening from 1947 “Theatre of Tomorrow” in the photo section for this theater.

The Melrose Theater opened May 15, 1931 with “Kiss Me Again.” The theater closed in March of 1947 for refurbishing that would be the Esquire Theater. The Esquire era opened August 1, 1947 with “Sea of Grass.” For Interstate Theater Circuit, a one-year period in which openings of the Wilshire (Oct. 1946), Inwood (May 1947), Esquire (August 1947), and Circle (Oct. 1947), along with the new Forest (1949) represented a major push into new-build, suburban theater exhibition.

The film that changed the trajectory of the Esquire was Disney’s, “The Living Desert” which got a first-run at the Esquire for a three-week booking that was extended to 18 weeks in 1954. It sold around 180,000 tickets and was drawing large audiences through its closing night. Disney’s “The Shaggy Dog” played 13 weeks. But The Esquire was not exclusively a kids' house by any stretch. The theatre’s ability to be a first-run high-end house established, the theater was equipped to run super widescreen 70mm stereo roadshows. And the mid-1950s through the mid-1970s were the theater’s halcyon years.

But with twinning and multiplexes in vogue as the 1970s continued, the Esquire stayed a single screen and had trouble filling its 950 seats while property values increased around it. The Esquire would be in trouble. Lincoln Property acquired the theater as a real estate investment. Additionally, the city of Dallas – in a crackdown on sign ordinances – told the theater that its Esquire signage was too close to the street. Plitt Theaters – which acquired the ABC Interstate Theater Circuit – closed the Esquire with the 3-D film, “Comin' At Ya” September 17, 1981.

In April 1982, the theater got a short-lived new lease as both a live theater place and hosted the USA Film Festival showing film one last time. In June of 1983, Lincoln sold off the signage but the theater’s impending demolition got delayed as Lincoln tried to buy more property and ran into historical preservationists. Finally in February of 1985, locals tore out the seats and the theater was demolished. As an empty concrete slab for many years, street vendors hawked knock off merchandise and used clothing into the 1990s before becoming an overflow parking lot.

I was a relief projectionist from 1975 to 1977, when we had long runs of Mel Brooks and Monty Python movies. This was a jewel box of a movie theatre with lush curtains and sidewalls. The booth had Cinemeccanica 35/70MM projectors put in at the beginning of the ‘60’s.