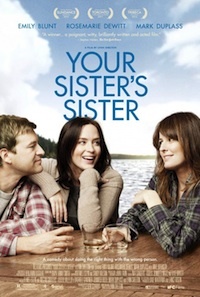 Your Sister’s Sister is a new comedy about romance, grief and sibling rivalry. A year after his brother Tom’s death, Jack is still struggling emotionally. When he makes a scene at a memorial party, Tom’s best friend Iris offers up her family cabin on an island in the Pacific Northwest so Jack can seek catharsis in solitude. Once there, however, he runs into Iris’ sister Hannah who is reeling from the abrupt end of a seven-year relationship and finds solace in Tom’s unexpected presence. A blurry evening of drinking concludes with an awkward sexual incident, made worse by Iris’ sudden presence at the cabin the next morning. A twisted tale of ever-complicated relationships is set in motion with raw, hilarious and emotional performances from the all-star cast.