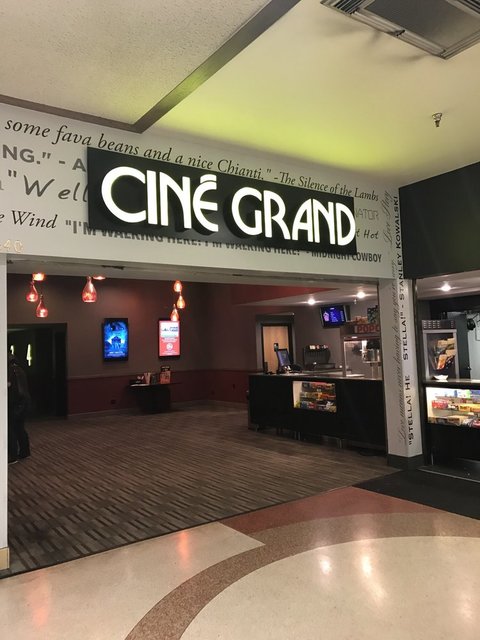 That Civic Cener Plaza address didn’t work on the Google Map, this address is in Civic Center Plaza.

Here is some rough info that could stand to be corrected or more info added to.
Owners:
1980-1985 Carisch Theaters Incorporated
1990 Excellence Theaters Corporations
1995-2003 Carmike Cimemas
I know it is no longer Carmike, they now have a 6 screen in Mankato.
Are we sure it is still open and who runs it?

Here’s a little more rough info that can also stand to be corrected or more info added to.

In the late 1980’s it became a 4 screen as it was taken over by Excellence Theaters Corporation.

In the early 1990’s it was taken over by Carmike Cinemas.

This house was never a twin. Carisch Theatres operated a twin called the Cine 2 in Mankato from 1973 until at least 1985, but various Boxoffice items show that the Mall 4 and the Cine 2 were different theaters. The Mall 4 might have been renamed the Cine 4 at some point (I’ve only ever found that name used once in Boxoffice, in the February, 1991 issue), but it was opened as a quad by Carisch Theatres in 1978. The smallest of its auditoriums had 112 seats and the largest seated 278, according to an item in Boxoffice of May 22, 1978.

The 1978 item about the opening of the Mall 4 said that Carisch had closed the State and Town theaters on Wednesday, May 3, and that films apt to attract large audiences would be booked into the circuit’s Cine 2, which had 475 seats for each screen.

The Cine 2 had opened as the Camelot 1 and 2 in 1970, and had been acquired by Carisch in 1973. The twin was located at Stadium Road and Warren Street, which is now the location of the Carmike Cine 6. So far I’ve been unable to determine if the Cine 6 is entirely of recent construction or if it incorporates the old Cine 2 building.

That’s as much as I’ve been able to puzzle out from Boxoffice. Someone personally familiar with Mankato will have to fill us in on the details about which of these theaters had which names, and when.

The Maverick 4 seems to have been open for at least part of 2010. It was being operated as a discount house by an outfit called Spectrum Cinema. The “current movies” page of their web site hasn’t been updated since February 3. However, a page about the movie “Dawning” dates from April 5, so the house might be holding special showings intermittently. I can’t find any events scheduled for specific dates, though. Maybe Cinema Treasures should add the category “In Limbo” to the existing categories of “Open” and “Closed.”

Joe, thanks, that’s interesting, but confusing.

Yes, it’s very confusing. I spent a couple of hours searching the Boxoffice database, hoping to find evidence that the Mall 4 was renamed the Cine 4, and that the Cine 2 was renamed the University Square Cinemas, but never found them. The Carisch circuit had multiplexes in other cities with the name Cine followed by a number. It’s quite possible that they had, for a time, both a Cine 2 and a Cine 4 operating in Mankato.

One thing I forgot to include in my comment above is that Boxoffice made a reference to the Mall 4 in Mankato in its issue of February, 1985, so if that house was renamed Cine 4 it happened between then and the time of the single reference to a Cinema 4 at Mankuto, in the february, 1991, Boxoffice.

On the Mankato Free Press web site there’s an article about the Maverick 4, dated May 16, 2010. (I tried linking to the article itself, but the link wouldn’t work.) It looks like the theater is not dead, despite the lack of updates to its web site.

The guy operating the theater is a 29-year-old named Ulysses Awsumb, which at first I took to be a pseudonym. But Awsumb is indeed a real surname, which is totally, uh, awesome, (though I do realize why Thomas Pynchon never gave the name Ulysses Awsumb to one of his characters- critics would have accused him of stretching his symbolic puns to the breaking point.)

Anyway, Mankato Place, the complex the theater is in, is owned by Ulysses' father, Gordon Awsumb, so maybe the family pockets are deep enough to keep the house going for a while. Here’s a quote from the article:

Since November, ticket sales have doubled. In March alone, sales were almost triple what they were in November. “On a Friday night, we are seeing anywhere from 400 to 500 people,” Awsumb says. “During the weekend, weâ€™re getting about 2,000 people. And we have gone from 10 to 20 people on weekdays to about 80.”

It does sound promising. The article also says that Awsumb is in the process of launching a new web site for the theater, so maybe the current movie listings will be back soon. Still, that doesn’t explain why the Internet movie listing sites currently only show the Carmike and Cinemark houses in Mankato.

Cine 2 turned into Cine 4. When Carisch owned Cine 2 it also showed adult films after midnight I believe into the early 80â€™s and was famous for late night Rocky Horror movie screenings. Mall 4 which is now Maverick 4 was never part of Cine 2 but shared common ownership. Cine 2 split its larger two screens into 4 smaller ones. Carmike expanded what was Cine 4 and added on to create 2 additional screens. I worked at Cine 2/4 during its remodel as well as Mall 4 and the Twin Star Driven in Mankato. After Carisch was purchased by Essenesse out of Chicago (Can’t remember the spelling) they changed their name to Excellence Theatres. During ExcellenceTheatres ownership they specialized in having the staff wear tuxedos to give a roaring 20’s feel.

Theater has been bought and the remodel started. It also has LIVE events now such as football, basketball, concerts, etc, thats starting the first couple weeks in September. It was bought by Chalet Theaters who have a number of ones in the South and East.