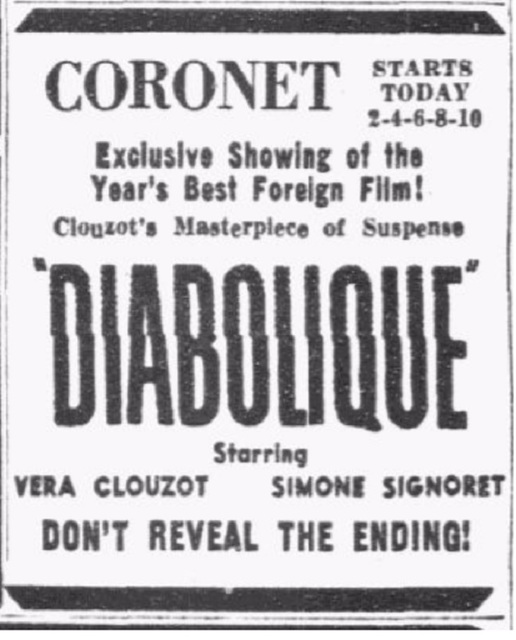 Opened as the Gay Theater on March 3, 1942. In December 1948, it was re-named Coronet Theater. In 1976 it became the Edison Theater followed by Mexico Theater, and finally Oriental Theater, playing Asian films which closed in the early-1980’s.

The Coronet was set to open on December 28, said Boxoffice of December 18, 1948. Alfred Sack, new operator of the remodeled theater, intended to show foreign language and art films with a top admission of sixty cents. The item didn’t say if the Coronet had been renamed, only that it had been remodeled.

A December 24, 1953, Boxoffice item said that Sack had opened the Coronet “…in an abandoned and four-times closed small and unsuccessful neighborhood film house.”

I thought the story vaguely sounded familiar as I was writing my previous comment, so I double checked and, sure enough, this theater is already listed at Cinema Treasures under its final name, the Mexico, and I’d already posted lots of information about it on that page last year.

Thanks for the tipoff with the aka’s, Bob. I probably wouldn’t have realized the duplication existed if I hadn’t seen them.

The property began as the Gay Theater on March 6, 1942 at North Fitzhugh and Capitol. The 500 seat theater was named after its manager I. Gay who operated a Mesquite theater. Included were love seats built for two staggered throughout the auditorium. The first showing was “Lady, Be Good.” The low-price theater and its manager, John Stewart, attempted to show retro films with old-school live presentation and that may have tipped the theater to its next iteration. The theater’s old school art deco look in the lobby and exterior added to the presentation.

Veteran Dallas feature film producer and distributor Alfred Sack took on the Gay Theater and made it a revival house, art film, and foreign film house on November 20, 1948. Sack changed the rebranded Gay Theater as the Coronet Theater on Monday, December 7 1948 with new sound system, cushioned opera seats and murals painted by Rene Mazza.. With members of the Dallas Symphony Orchestra on hand, “The Barber of Seville” was the Coronet’s first feature. It was billed as the first foreign language art house in the south or southwest. In its first six months of operation, the Coronet played 39 films. “Lucrezia Borgia” sold out the 500 seat house twice and another 500 people were turned away.

The Coronet faced art house pressures, especially from the Fine Arts Theater in University Park and in the early 1960s became one of Dallas’ first houses to regularly book “girlie” films. “Have Figure, Will Travel” set in a nudist colony was the first such booking in 1962 along with “Nature’s Paradise.” The bookings continued with films including Russ Meyer’s “Europe in the Raw” which was only the second theater in the U.S. to book the title. The adult films continued throughout the decade and into the 1970s at the Coronet. The adult theater business flourished in Dallas including the Fine Arts switch to porno chic in the early 1970s among many others. The theater decided to switch back to a true art format.

With the Coronet well known for its adult fare for about 15 years, a new operator Movie Inc. out of New Mexico took on the Coronet and decided to rebrand it as the Edison Theater on August 15, 1976. Movie Inc operated the Guild Theater in Alburburque along with theaters in six other cities and offered a subscription service to the foreign and revival fare. With most of the art theaters moving to adult fare, the Edison did excellent business in Dallas. The theatre now had just 309 seats.

In November 1977, the art deco highlights were brought out in a refurbishing of the Edison. Manager Jim Frazee also updated the projection. They also offered live entertainment in the mix. With many sell-outs on cult films including “Pink Flamingos” and changing neighborhood featuring many car break-ins, the Edison moved to the Granada Theater on April 20, 1978 not fare away. The Granada held twice as many people and was more of a night spot for the target audience. The Granada had been a neighborhood house, a repertory house, a $1 house and a XXX house before becoming a concert hall. Vacant for six months after the failed concert hall, the Edison filled in the Granada.

The Edison wasn’t vacant for long as just months later, it became the Mexico Theatre and played Hispanic films with some Asian films at midnight. The operator was showing Spanish language films at the nearby Arcadia on Greenville. In the early 1980s, the theater was closed and rebranded as the Oriental exclusively playing Asian films. When the Oriental closed, it was then home to nightclubs including Club Jakara in the early 90s and then the Latin Active Club. Unfortunately, a well publicized gun fight and at least two other shootouts at the Latin Active Club in 1996 seems to be the beginning of the end for the address as an entertainment site. In 1999, the theater was razed in favor of a Hispanic meat market which then became a restaurant.

I worked this theatre in 1972 as a projectionist—-Sam Chernoff was the owner(he later took over the Lakewood when Interstate gave it up). The booth was in a most unusual position regarding the auditorium—-it was on the left side of the theatre. Despite this, there was hardly any keystone effect.

jamestv, I’m glad you posted this comment about the projection booth and its angle to the screen, because I remembered that from the one and only time I was ever in the Coronet (as I believe it was still called at that time) – which was to see a revival of “Ben-Hur” in a perfect print (I’m guessing it was a 35mm anamorphic job). There were parts of the picture that were slightly out of focus, I believe over on the far right-hand side, but it did not seem to detract from our enjoyment of the film. As I recall, the place was packed – this was in the summer of 1977.