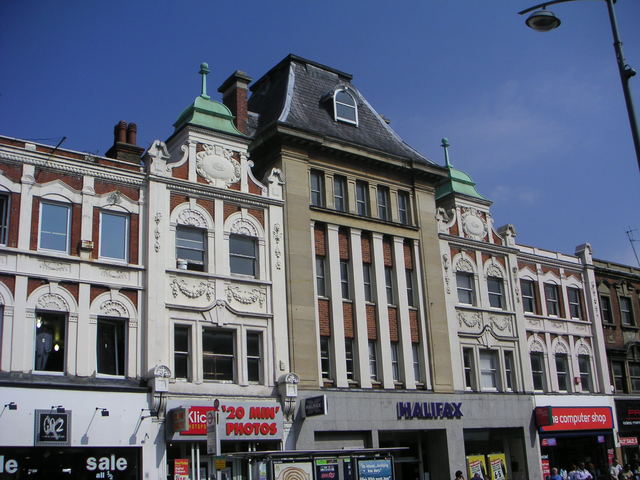 Located in the north London district of Wood Green at 7 Cheapside on the High Road. The Wood Green Empire Theatre was built for Sir Oswald Stoll, as one of his chain of Stoll-Moss Empire variety theatres. It opened on 9th September 1912. Designed by noted theatre architect Frank Matcham, the exterior of the building was included in a parade of shops named Cheapside. The entrance to the theatre had a tiled mansard roof with an open dome on top. The auditorium ran parallel to the High Road, behind the Cheapside shops.

Inside the auditorium the decoration was typical of an Edwardian variety theatre, with finely detailed plaster decorations. There was a large dome in the ceiling, which contained a sliding roof, to allow for ventilation. The theatre had a capacity of almost 3,000 (including standing). There were 895 seats in the stalls, 406 in the dress circle, 506 in the balcony and eight boxes which seated a total of 32. The proscenium was 43 feet wide, the stage 37 feet deep and there were eight dressing rooms. As it was a purpose built variety theatre, it was equipped with a Bioscope box from its opening, and films were a part of the variety programme.

It was popular from its opening, and many stars appeared over the years, including Ella Sheilds, G.H. Elliot, Gertie Gitana and Vesta Tilly. Plays were also produced starring Seymour Hicks, Ellaine Terris, C. Aubry Smith, Lillian Braithwaite, Gladys Cooper and Edmund Gwynn. One claim to fame for the Wood Green Empire Theatre was the death of American illusionist Chung Ling Soo on 18th March 1918, when his act featuring catching a bullet on a plate went horribly wrong and he was shot dead in the chest in front of a packed audience.

In the late 1920’s, the Wood Green Empire Theatre was converted into a cinema, and screened Al Jolson in "The Singing Fool". Weeks of cine-variety follwed for several years, and films were screened on Sundays, a day when live performances were fobidden by law. Film use had ceased by the end of World War II, and it reverted back to full stage use.

It was taken over by Associated Television(ATV) which was owned by Stoll-Moss Theatres chain, and they used it as a television studio theatre, staging spectacular shows, but this only lasted a short while until they had built their own purpose-built television studio.

The auditorium of the Wood Green Empire Theatre was demolished in the mid-1960’s, and a Sainsbury supermarket was built on the site with its entrance on Lymington Avenue, where the rear of the theatre once stood (the stage and dressing rooms were on Dovecote Avenue).

The entrance building to the theatre on the High Road, survives as a branch of the Halifax Bank PLC, minus the dome on top. The Cheapside parade of shops also survives intact.

I started work at John Temple menswear shop the day the started to demolish the theatre. I cried as I watched.