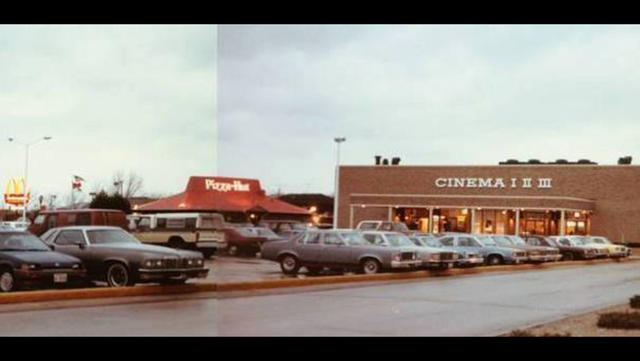 The West Plaza Cinema I & II opened June 12, 1970 at the West Aurora Plaza shopping center on Galena Boulevard near Orchard Road. It was Aurora’s first twin movie house. Opening day films were "The Cheyenne Social Club" and "Marooned". Ads in the Beacon-News announced "acres of free parking" and "a great step forward in the progress of Aurora".

The theater was demolished in 1994 to make way for new stores. The theater had last been operated by the Cineplex Odeon chain. Any additional information on this theater would be appreciated.

opened with two good movies,Fonda and Stewart and Gregory Peck in the other.I know everyone knows who was in what film.

No Mike what movies were they?

Come on TLSLOEWS you know with actors were in the above pictures.

Looks like it was a Mann Theatre and NOT a GCC? the CINEMA I-II-III lettering confuses me!

Although some signage resembled GCC font, this was built by L&M, who also operated the Isle in downtown Aurora. The larger house was split to compete with Plitt’s Fox Valley 4, which opened in December, 1977. Eventually, Plitt took over operation, followed by Cineplex Odeon in 1985.